The process that began with the World Summit, known by the acronym WSIS, “is where the real grassroots work is being done. It is where people gather if they believe in effectively using ICTs [Information and Communications Technologies] for sustainable development,” said International Telecommunication Union (ITU) Secretary-General Houlin Zhao.

“WSIS has been a major driver of socio-economic development by providing a tangible, global framework for harnessing the tremendous power of ICTs and I am confident that it will play an even greater role in achieving the new 2030 Agenda for Sustainable Development,” Mr. Zhao said on the eve of the so-called WSIS+10 High-Level Meeting.

The two-day meeting, convened by UN General Assembly President Mogens Lykketoft, in close collaboration with ITU and other UN agencies and programmes such as the UN Education, Scientific and Cultural Organization (UNESCO), the UN Conference on Trade and Development (UNCTAD) and the UN Development Programme (UNDP), is expected to result in a road map for efforts to put ICTs at the heart of new development strategies.

In addition to bridging the digital divide, the delegates will address issues of cybersecurity, Internet governance, human rights on the Internet, as well as areas of future actions to ensure a people-centred inclusive and development-oriented Information Society.

“It is the largest and most comprehensive review of the WSIS goals, targets and process since the Summit, organized by ITU in a multi-stakeholder set up, was held in two phases, in 2003 (Geneva) and 2005 (Tunis),” said the UN specialized agency, which allocates global radio spectrum and satellite orbits, develops the technical standards that ensure networks and technologies seamlessly interconnect, and strive to improve access to ICTs to underserved communities worldwide.

“ICTs have become an essential part of long-term social and economic development, but progress will depend on strong, resilient, available, secure and trustworthy communications infrastructure and services,” it added.

The High-Level meeting will conclude on 16 December with an outcome document which will seek to place ICTs where they can serve as an important accelerator of access to education and health care, e-government services, environmental monitoring, women’s empowerment, and more.

In other news today, UN Women and ITU will host the annual Gender Equality and Mainstreaming in Technology (GEM-TECH) Awards, which recognize the tremendous power of ICTs to transform women’s lives by providing them with better access to education, information, support networks, employment opportunities, avenues for political participation, and devices and apps that can improve personal safety.

The awards are celebrated this year as part of the 20-year commemoration of the Beijing Platform for Action.

The three GEM-TECH winners and three Global Achievers will receive their awards at a ceremony held this evening at Civic Hall in New York, in partnership with the New York City Mayor’s Office of Technology and Innovation and generously sponsored by Mozilla, Microsoft, the Swiss Federal Office of Communications, Verizon and Facebook. The awards will be presented by ITU Deputy Secretary-General, Malcolm Johnson, and UN Women Deputy Executive Director, Lakshmi Puri.

The annual WSIS Forum, to be held from 2 to 6 May 2016 in Geneva, will build on the outcome of this week’s meeting while looking toward concrete solutions strengthening the impact ICTs in advancing achievement of the Sustainable Development Goals. 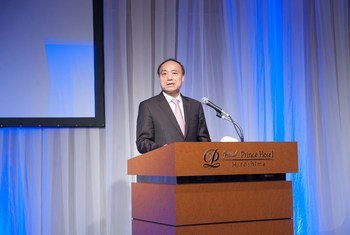 30 November 2015
Some 3.2 billion people are now online, representing 43.4 per cent of the global population, but the number still falls significantly short of reaching the anticipated goal of 60 per cent by 2020, according to a United Nations report released today.