MINUSCA
Under the watchful eyes of the UN peacekeeping mission known as MINUSCA, voting takes place in Bangui, capital of the Central African Republic, on a constitutional referendum meant to help stabilize the country.
14 December 2015

A constitutional referendum meant to help stabilize the Central African Republic (CAR) amid conflict between Muslim and Christian factions took place successfully in the majority of the country yesterday, but violent “spoilers” disrupted the process in some areas, the top United Nations peacekeeping official reported today.

“Efforts to undermine yesterday’s constitutional referendum demonstrate that there are actors that remain determined to derail the political process,” UN Under-Secretary-General for Peacekeeping Operations Hervé Ladsous, told the Security Council, reporting that three UN peacekeepers were injured in cases of violence and intimidation in Bangui, the capital, and in Bria.

“With only two weeks until the first round of (presidential) elections, time is of the essence to further contain such attempts by the spoilers. The entire international community must remain united in its uncompromising message rejecting any attempt to derail the political process from any quarter and to demonstrate that there will be consequences for those that seek to undermine the political process,” he said.

“We must not allow attempts by a few, as demonstrated yesterday, to disrupt the hopes and aspirations of many for a successful electoral process that will return their country to constitutional order,” emphasized Mr. Ladsous.

Voting has been extended today in places where it was impeded as the electoral calendar moves into high gear to complete the transition in CAR after more than two years of fighting between the mainly Muslim Séléka and mainly Christian anti-Balaka groups. The first round of presidential and legislative elections is scheduled for 27 December.

Mr. Ladsous said efforts to undermine the referendum by elements of both groups were reported in parts of Bangui and outside, although preventive steps by the UN integrated stabilization mission in CAR, known by the French acronym MINUSCA, allowed voting to proceed in at least some polling centres in Bangui and Bria, despite localized security incidents.

In Birao, Bossangoa, Ndele and Kaga-Bandoro “spoilers resorted to violence and intimidation of voters and electoral staff thereby preventing the holding of the referendum despite the actions of MINUSCA,” he added.

“Looking ahead, we must be reminded that as important as they are, these elections are not an end in themselves,” he stressed. “In order to truly address the root causes of the crisis, we will need to support the new Government in working in a spirit of unity, inclusivity and reconciliation.’

“To address these as well as other priorities such as the humanitarian situation or economic recovery, key to the stability of the country, the sustained support of this Council and key partners will be essential. The people of the Central African Republic who have experienced such tragedy for so long deserve nothing less,” he said.

Mr. Ladsous highlighted the unprecedented registration of nearly two million voters, 95 per cent of the estimated electorate, demonstrating “the strong desire for change,” and vowed that MINUSCA and the UN system will continue technical, logistical and security support.

He noted that Pope Francis’s visit to Bangui last month brought new hope for easing inter-communal tensions, citing the “remarkable image” of unity afforded by the Pope’s presence at a mosque, showing that religion is not at the heart of the country’s challenges.

He pledged MINUSCA’s continued commitment to a “robust posture” to protect civilians and called for strong action to ensure that the perpetrators of serious human rights abuses are brought to justice.

MINUSCA, set up in April 2014 to help restore stability peace after a breakdown of governmental authority, currently maintains nearly 11,000 uniformed personnel in the country. 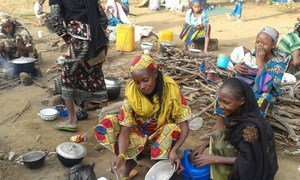