Mr. Feltman also met with staff of the UN Assistance Mission in Afghanistan (UNAMA) to express appreciation for their dedication throughout the past several months as Kunduz fell to anti-Government elements. In addition, he paid tribute to Toorpeki Ulfat, who was murdered in Kandahar in October, and commended her for her tireless work in human rights.

On 21 December, the UN Secretary-General’s Special Representative for Afghanistan, Nicholas Haysom, will update the Security Council on the situation in the country. In a September briefing, he emphasized to Council members that Afghanistan’s path to stability and self-reliance could not be taken for granted, and he underscored the importance of continued international community support.

“The current refugee exodus reflects the despondency of many Afghans,” Mr. Haysom said at the time. “A clear signal of continued international support will mitigate the uncertainty fuelling this exodus.” 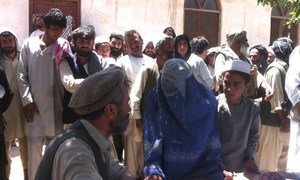 A special report was released today by the United Nations mission in Afghanistan and the UN rights office, which documented civilian harm and human rights concerns in Kunduz, Afghanistan from 28 September to 13 October 2015 – the period covering the Taliban's attack and temporary occupation of Kunduz city, including the counter-offensive by pro-Government forces up to the point they regained control of the city.