While global hunger figures are declining, the number of food insecure people in mountain areas rose 30 per cent over 12 years to nearly 330 million, according to a study released today by the United Nations Food and Agriculture Organization (FAO) and a partner agency on International Mountain Day.

“That means that one in three mountain people, both urban and rural, in developing countries faced hunger and malnutrition, compared to one out of nine people globally,” FAO said.

The UN General Assembly designated 11 December International Mountain Day and as of 2003, it has been observed every year to create awareness about the importance of mountains to life, to highlight the opportunities and constraints in mountain development and to build alliances that will bring positive change to mountain peoples and environments around the world.

This year, FAO, together with Mountain Partnership, mapped the vulnerability of highland peoples to food insecurity and found that the number of food insecure people living in mountain regions in developing countries grew to nearly 329 million in 2012, up from 253 million in 2000, even though the overall population of the world’s mountain peoples increased only by 16 per cent.

The study showed that the growing profile of hunger is not the only challenge that mountain-dwellers face, reporting that 90 per cent of them live in developing countries where most are dependent on subsistence agriculture, working in fragile ecosystems that are easily affected by climate change.

Almost 59 million mountain people in Africa were identified as vulnerable to food insecurity in 2000, a number that increased 46 per cent to 86 million by 2012, according to the study. The majority of vulnerable people are located in eastern Africa.

Mountain populations of Asia are particularly prone to vulnerability, the study showed.

Results of the study show that more than 192 million people were considered vulnerable to food insecurity in 2012, an increase of over 40 million people, or 26 per cent, from 2000.

In mountain areas, where family farming and smallholder agriculture, forestry and animal husbandry are the prevailing farming systems, investments and technical support are needed to diversify and boost mountain production systems through, for example, integrating indigenous knowledge and traditions with modern techniques.

Promoting mountain products is the theme chosen for this year’s celebration of Mountain Day, according to FAO, which said globalization offers opportunities for mountain producers to market their high quality mountain products, such as coffee, cocoa, honey, herbs, spices and handicrafts.

♦ Receive daily updates directly in your inbox - Subscribe here to a topic.
♦ Download the UN News app for your iOS or Android devices.
mountain 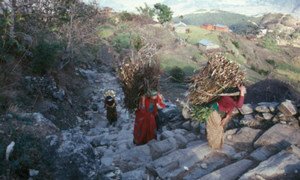 With mountains providing freshwater to half the world's population mainly thanks to the water and soil management practiced by millions of mountain farmers, the United Nations today called for increased resources and secure land tenure for this crucial sector.