“I’d like to take this moment to highlight, commend and appreciate the strong commitment and engagement of ministers, negotiators and all the staff who are engaged in this very difficult negotiation,” Mr. Ban told reporters at a press conference, alongside French Minister of Foreign Affairs Laurent Fabius, at the Paris-Le Bourget site.

“I have been attending many difficult multilateral negotiations, but by any standard, by far, this negotiation [...] is the most important for humanity,” he continued. “Very limited hours remain.”

The UN chief said there are still several outstanding issues, such as differentiation, the level of ambition and climate financing, but that thanks to many years of negotiations the parties already have “very good solutions.”

“This morning we have a much cleaner, streamlined text,” Mr. Ban explained. “This is a good basis for further negotiations. Many brackets have been dropped and only a few brackets remain.”

Reminding that even though as Secretary-General of the UN he is not engaged in negotiations, he said he is urging negotiators to make their decisions based on a global vision.

“This is not a moment of talking about national perspective. Good global solutions will help good local solutions,” he stressed, appealing to all countries to “make final decisions for humanity.”

Right before the press conference, Mr. Ban and Minister Fabius, who is also President of COP21, met to discuss the latest developments and to prepare for the adoption of the agreement, now expected tomorrow.

“We’ve worked a lot these past days,” said Mr. Fabius at the press conference. “This morning we finished our collective work at 6am, and now I’ll be holding consultations with all the groups.”

“Let me simply tell you that we are almost there, that I’m optimistic, that the preparations towards this ambitious agreement have been good, and that following these consultations, tomorrow morning at 9 I will be able to present a text to all parties, which I’m sure will be approved and will be a big step forwards,” the French Minister added.

♦ Receive daily updates directly in your inbox - Subscribe here to a topic.
♦ Download the UN News app for your iOS or Android devices.
COP21|climat 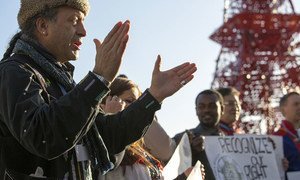 Meeting with civil society groups today at the United Nations climate change conference (COP21), Secretary-General Ban Ki-moon said he counts on grassroots organizations to help keep governments accountable, so they implement what they have committed to in words.