UNICEF/Jeoffrey Maitem
A mother carries her daughter as they evacuate from Typhoon Koppu-hit town of Laur, Philippines, on 19 October 2015. The ongoing El Niño pattern is likely to be one of the strongest since 1998 and will continue into early 2016.
10 December 2015

The ongoing El Niño weather pattern in the Asia and Pacific is likely to be one of the strongest since 1998 and will continue into early 2016, according to a new United Nations advisory, which urges regional cooperation for early warning, in-season mitigation, and long-term adaptation strategies to curb climate risk.

“The impact of the 2015-2016 El Niño could be even more severe in certain locations, such as the uplands of Cambodia, central and southern India, eastern Indonesia, the central and southern Philippines, central and northeast Thailand...” stated the Third Advisory Note on El Niño issued jointly by the UN Economic and Social Commission for Asia and the Pacific (ESCAP) and the Regional Integrated Multi-Hazard Early Warning System for Africa and Asia (RIMES).

While many southeast Asian countries, particularly India and Sri Lanka, expect to face severe flooding caused by heavy rainfalls, some Pacific islands – Papua New Guinea, Timor-Leste, and Vanuatu, among others – have been experiencing a serious drought, causing water shortage and food insecurity, according to the report.

“One of the most significant impacts is on agriculture, which is a key component of the GDP (Gross Domestic Product) for many Pacific countries,” warned the report.

Noting that the current UN climate change conference (COP21) in Paris has discussed and addressed the impacts brought by El Niño, and that actions are being taken in some countries, the publication provided key guidance in this regard.

Regional cooperation, the note stressed, is of great importance, given the transboundary nature of El Niño risks.

Early warning and monitoring, pre- or in-season mitigation, adaptation and response, as well as long-term risk management should be considered to tackle some shared vulnerabilities and risks.

“Only by coming together in the spirit of cooperation can the Asia-Pacific region hope to become truly disaster resilient and achieve sustainable development in the future,” said the guidance. 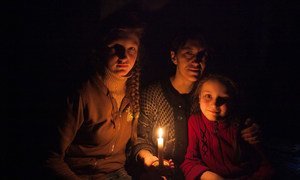 Despite a significant reduction in hostilities in eastern Ukraine in the last few months in a conflict that has already left over 9,000 people dead and nearly 21,000 injured, serious human rights concerns persist, including killings, torture and impunity, the United Nations reported today.