Meeting with civil society groups today at the United Nations climate change conference (COP21), Secretary-General Ban Ki-moon said he counts on grassroots organizations to help keep governments accountable, so they implement what they have committed to in words.

“One of the very valuable lessons that I’ve learned as Secretary-General during the last nine years is that no government, no international organization, can do its work properly without active engagement and support from civil society,” Mr. Ban told members of non-governmental organizations in Paris, alongside Al Gore, the former Vice-President of the United States and Chair of the Climate Reality Project.

On behalf of civil society groups, Mr. Gore thanked the Secretary-General for his tireless leadership to solve the climate crisis: “I’ve had the opportunity to work with you for quite a few years now and not many people know the focus and constant dedication that you have had to this issue,” he said.

The former Vice-President also presented a petition signed by 6.2 million people from around the world, as well as a joint statement on behalf of all civil society groups at COP21. It stated that these millions of individuals are “demanding a strong agreement that will shift the world away from carbon pollution and rapidly towards climate solutions.”

Noting his appreciation for the signatures, the UN chief highlighted that he thinks the world is standing at a very critical moment: “I’m hopeful and I’m reasonably optimistic that we’ll be able to have for the first time in the history of the United Nations a universal and very ambitious climate change agreement which will make our lives healthier and more prosperous.”

Since the beginning of last week, government representative have been negotiating a new agreement with the goal of limiting global temperature rise to less than two degrees Celsius. Yesterday, Laurent Fabius, the French Minister of Foreign Affairs and President of COP21, said the intention is to have an adopted agreement by Friday.

“We would not be where we are today here in Paris, with 196 Parties poised to adopt a global climate change agreement, without the leadership and vision of civil society,” Mr. Ban insisted, adding that after Paris is over, their voices will be needed more than ever.

He also underlined civil society's critical role in driving climate action on the ground: “You have provided examples of new ways of working and innovative new solutions that are creating a greener, more sustainable world. I urge you to continue to demand more from all Governments,” the UN chief stated.

Meanwhile, the Deputy Director of Avaaz, a global web movement, told Mr. Ban she was at COP21 representing over three million people who are calling for 100 per cent clean energy by 2050.

“That ambitious goal is for them the metric of success, but they’re watching for something else – this conference can be a renewed level of hope in the UN process and the ability of governments to come together and cooperate,” said Emma Ruby- Sachs. “It’s greater than climate. This is about how we solve global problems.”

Holding back tears, Ms. Sachs also told the Secretary-General that she is expecting her first child in a couple of months, and she wants the next generation to feel hopeful about their planet. 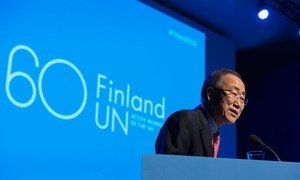 In Finland, Ban urges open dialogue to prevent polarization and racism against asylum-seekers

On the occasion of the 60th anniversary of Finland's membership to the United Nations Secretary-General Ban Ki-moon commended the country on its leadership in advancing the Organization's work on peace and security, development and human rights, and expressed his gratitude for the country's solidarity with refugees in the region.