The rules governing global trade of food and agricultural products should aim to improve countries' food security and other development objectives, according to a new United Nations report issued today.

“The challenge… is how to ensure that the expansion of agricultural trade works for, and not against, the elimination of hunger, food insecurity and malnutrition,” indicated the United Nations Food and Agriculture Organization (FAO) flagship report on the State of Agricultural Commodity Markets.

The report aims at countering the current polarized views on agricultural trade, in which some insist that free trade makes food accessible and available, while others, noting the recent volatility in food prices, insist on the need for a more cautious approach to trade, including a variety of safeguards for developing countries.

The different interpretation of trade and food security, and different implementations of trade rules are the main causes for the ideological clashes, according to the report. Moreover, appropriate policies rely heavily on the development of national markets. Therefore, “domestic support policies should not be rejected out of hand,” said the report.

However, “it is very context specific (as) it depends on the characters as the country, the level of development…the competitiveness of the agriculture sector, the functionality of the markets [and] the degree of urbanization,” Jamie Morrison, FAO senior economist, said in a video message, while underscoring that actions also depend “importantly (on) the way that governments intervene in markets.”

International rules should further support national trade policies, especially in the four dimensions of food security – availability, access, utilization and stability – said the report, commenting that such implementation will be an “enabler” of sustainable development and hunger eradication.

The report also noted the new trend in the global trade arena, with food tripling in trade values for the last decade. This change is the result of geo-economics shifting, the emergence of new and subtler dynamics such as global value chains and vertical integration within agricultural production, as well as the "supermarket revolution" of retail chains in many developing countries.

“We need to balance the imperatives for countries to [pursue] their own national objectives, with the concept of doing no harm to trading partners,” said Mr. Morrison. 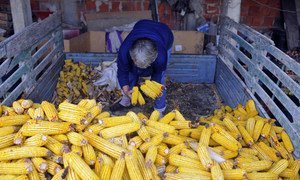 November saw a decrease in major food commodity prices as the cost of most globally-traded staples fell, the United Nations Food and Agricultural Organization (FAO) reported today as it also warned of deteriorating food security in areas affected by conflict or severe weather.