The United Nations Entity for Gender Equality and the Empowerment of Women (UN Women) was among the many voices that called for immediate reform of the sexual harassment laws in India, where a study conducted by the agency and the Government showed that nearly 54 per cent of women and 69 per cent of men who see women getting harassed prefer not to get involved.

Incidents such as that involving the student in New Delhi, now dubbed the ‘Nirbhaya’ rape case by the media, show a stark and truly disturbing reality of crimes committed against women. In 1993, the UN General Assembly adopted the Declaration on the Elimination of Violence against Women, which provided a framework for action on the issue.

However, 20 years later, UN Women found that one in three women still experience physical or sexual violence, mostly by an intimate partner.

Another study conducted by the UN World Health Organization (WHO) revealed that nearly 35 per cent of women across the globe having experienced either physical and/or sexual intimate partner violence or non-partner sexual violence.

According to the Deputy Executive Director of UN Women, Lakshmi Puri, one of the primary causes of violence against women is the deep-seated belief of gender superiority that exists in many communities globally.

“The major causes of violence are the extremely unjust and flawed beliefs that men and women, boys and girls are not equal. And from that the whole culture of discrimination develops and violence is a symptom of that discrimination,” Ms. Puri told the UN News Centre.

“There are social, cultural causes and religious interpretation of norms, which reinforces patriarchal constructs of roles and responsibilities of women and girls vis-à-vis the authority of men and boys,” she added.

Violence against women can take many forms, which makes it highly difficult to address the issue with a singular solution that can be applied to all cases. Often times, all these forms are not recognized and perpetrators are unaware that their actions are criminal. Ms. Puri cited the example of domestic violence, which incidentally is recognized as a crime by only 119 countries.

“It helps when you actually criminalize domestic violence so that it does not remain a personal family matter to be sorted out within the family, which is still the case in most countries,” she said.

Some of the acts that can constitute violence against women are sexual or physical abuse, psychological violence by an intimate partner, victims of homicide, sexual violence or verbal harassment in public spaces, child marriages, forced intercourse or other forced sexual acts, genital mutilation/cutting, human trafficking, cyber harassment, and school-related gender-based violence.

Additionally, there are studies which suggest that sexual orientation, disability or ethnicity can also be a contributing factor of violence against women, and certain contextual factors such as humanitarian crises, including conflict and post-conflict situations, have a high chance of putting women at risk of violence.

“We need to understand what violence against women is. That it is an epidemic,” stated Ms. Puri. “It manifests itself as physical, emotional, psychological and sexual violence. It is the worst form of discrimination. And it [occurs within] a culture of gender inequality, discrimination and violence and social norms that breeds this type of inequality and discrimination.”

On 9 and10 December, over 150 high-level representatives from over 40 Member States and the Council of Europe, UN agencies, academia and non-governmental organizations are attending ‘Ending Violence against Women: Building on Progress to Accelerate Change,’ a high-level global UN meeting in Istanbul to assess progress, identify challenges and renew global political commitments to end violence against women and girls.

This year’s International Day for the Elimination of Violence against Women, marked annually on 25 November, focussed on “prevention.” UN Women has been partnering with governments, other UN agencies and civil society groups to educate and advocate for ending violence by increasing awareness about the root causes of the scourge and highlighting its consequences.

“Prevention is the first and most important step for sure. What we are looking at under the prevention framework is to look at preventive factors, a strong human rights culture and zero tolerance for any kind of discrimination and prejudice towards women and girls. Early intervention and education are critical components, especially education that emphasizes the importance of rights and respect for all people,” said Ms. Puri.

However, the gargantuan task of changing patriarchal mind-sets, which are still prevalent in many countries, requires planned strategies, including expanding access to quality multi-sectoral responses for survivors, including mentoring, training, economic empowerment, and school interventions.

“There are some actions that have proven to be successful and can be developed. Community mobilization to change social norms through participatory and community-driven initiatives, school interventions that target teachers, school staff, students, reporting mechanisms, parents and the communities along with national advocacy to promote gender equality are some examples,” said Ms. Puri.

But even with preventive strategies, there is still a long way to go before reaching the goal of the complete elimination of violence against women. According to studies collected by UN Women, only 125 countries have established laws on sexual harassment and 52 have laws on marital rape. At the same time, the agency stressed that while the laws exist, they do not always meet international standards.

“Legal frameworks are just as important as their implementation,” said Ms. Puri, stressing that legal measures and policies involving criminalizing violence against women have proven to be quite effective in deterring related crimes.

In most cases, external pressure on governments to take action on violence against women can also help in establishing laws and policies to protect the rights of women and girls.

“The attention to cases of violence against women and girls in India has much to do with more reporting of the violations, as well as the media’s unwavering attention and also the Verma Commission report that was subsequently set up [after the Nirbhaya rape case], which created pressure on the Government to immediately act,” said Ms. Puri.

The UN has taken a huge step in addressing this issue by inscribing the need to establish gender equality as Goal 5 in the recently adopted Sustainable Development Goals that make up Agenda 2030.

To advance gender equality efforts, the UN General Assembly in 1996 established a UN Trust Fund to End Violence against Women, which has awarded $103 million to 393 initiatives in 136 countries and territories.

“We specifically focus on areas of service provision, prevention and implementation of laws. Our grantees [achieve] impact from changing the laws in their countries, to providing services involving all the shelters, to changing curriculums wherein boys and girls are educated about equality as opposed to man being dominant,” said the Chief of the Trust Fund, Aldijana Sisic.

Currently, the Trust Fund is reinvesting funds in the next five to eight years for prevention work, especially working with young people, echoing the sentiment shared by Ms. Puri that prevention is imperative.

From 25 November to 10 December, which is observed worldwide as Human Rights Day, UN Women marks 16 Days of Activism against Gender-Based Violence, a civil society driven campaign along with the “Orange the World” campaign to galvanize global action to end violence against women and girls.

From all the campaigns and discussions on the issue, Ms. Sisic rightly summarized that “the only way to end violence against women is to prevent it from happening in the first place.” 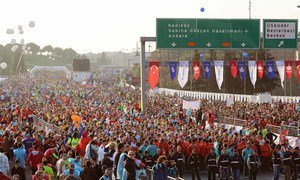 From parades to soccer matches, school debates, and the lighting up of hundreds of iconic monuments, starting tomorrow a United Nations call to “Orange the World” will galvanize global action calling for an end to violence against women and girls, which according to the UN’s agency for gender equality (UN Women) affects one in three worldwide.