UNODC/UNDP
UNODC and UNDP have developed a joint global campaign calling for people to ‘Break the Corruption Chain.’
9 December 2015

To mark International Anti-Corruption Day, the United Nations is calling for people to join a worldwide campaign to raise awareness about what Secretary-General Ban Ki-moon has called a “corrosive” scourge, and encouraging people from all walks of life to take action against this crime.

The UN Office on Drugs and Crime (UNODC) and the UN Development Programme (UNDP), under the slogan Break the Corruption Chain, are urging Governments, the private sector and the general public to jointly tackle this issue by changing their attitudes towards the problem.

The campaign also highlights that acting against corruption is imperative to achieving the recently adopted Sustainable Development Goals (SDGs), which aim to end poverty, protect the planet, and ensure prosperity for all, amongst others.

In his message on the Day, Mr. Ban noted that attitudes towards corruption have changed dramatically. “Where once bribery, corruption and illicit financial flows were often considered part of the cost of doing business, today, corruption is widely – and rightly – understood as criminal and corrosive,” explained the UN chief.

He emphasized that the new 2030 Agenda for Sustainable Development, which aims to end poverty and ensure lives of dignity for all, recognizes the need to fight corruption in all its aspects and calls for significant reductions in illicit financial flows as well as for the recovery of stolen assets.

“Corruption has disastrous impacts on development when funds that should be devoted to schools, health clinics and other vital public services are instead diverted into the hands of criminals or dishonest officials,” the Secretary-General stressed, adding that corruption also exacerbates violence and insecurity and can lead to dissatisfaction with public institutions, disillusion with government in general, and spirals of anger and unrest.

According to the Secretary-General, the UN Convention against Corruption provides a comprehensive platform for Governments, non-governmental organizations, civil society and individual citizens. Through prevention, criminalization, international cooperation and assets recovery, the treaty advances global progress toward ending corruption.

“I call for united efforts to deliver a clear message around the world that firmly rejects corruption and embraces instead the principles of transparency, accountability and good governance,” Mr. Ban said, adding: “This will benefit communities and countries, helping to usher in a better future for all.”

Echoing some of the UN chief’s sentiments, the Executive Director of UNODC, Yury Fedotov, underlined that the Day is an opportunity to acknowledge the work undertaken against corruption and bribery, but also to chart future efforts to rid the world of these crimes.

“This year was another milestone in these activities,” he said, noting that the sixth session of the Conference of the States Parties to the anti-corruption Convention had come together in St. Petersburg, Russia, to hold a dialogue on global anti-corruption activities.

“There were a number of successes, including in the areas of asset recovery, prevention of corruption and bribery, the development of public/private partnerships and the launch of the second cycle of the review mechanism under [Convention],” he stated.

Turning to sustainable development, Mr. Fedotov said that when corruption and bribery succeed, the goal of fairness and equality fails. Indeed, entire communities can be left without infrastructure, hospitals or schools. But, corruption also undermines vital tendering processes, damages industries and debases competition.

“Where corruption is rampant countries face poor inward investment, and blemished reputations. Corruption is, therefore, a short term victory for the few that deeply harms the many,” the UNODC chief warned, underlining the importance of the new development Agenda’s Goal 16, which seeks to substantially reduce corruption and bribery, as well as promote access to justice and effective, accountable and transparent institutions.

In her video message on the Day, UNDP Administrator, Helen Clark, reaffirmed the importance of addressing the challenges of corruption.

She further added: “Let us work to help break the culture of corruption and impunity, and help ensure that public institutions are trustworthy, that authorities are accountable for their decisions and actions, and that those engaging in corrupt action can expect to be subject to the rule of law.” 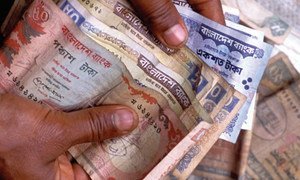