Along with positioning youth and youth-led organizations as important partners in the global efforts to counter violent extremism and promote lasting peace, the resolution also gives impetus to the youth-led peacebuilding and conflict-prevention interventions to build peaceful communities and underpin democratic, inclusive governance.

By the text, the 15-member Council “urges Member States to consider ways to increase inclusive representation of youth in decision-making at all levels in local, national, regional and international institutions and mechanisms for the prevention and resolution of conflict…and, as appropriate, to consider establishing integrated mechanisms for meaningful participation of youth in peace processes and dispute-resolution.”

The resolution, introduced by Jordan during its presidency of the Security Council in April, also covers the protection of youth in armed conflict, including asking “all parties to armed conflict to take the necessary measures to protect civilians, including those who are youth, from all forms of sexual and gender-based violence.”

Reacting to the Council’s action, Ahmad Alhendawi, the UN Secretary-General’s Envoy on Youth, haled the text as “a major breakthrough” in collective efforts to change the predominantly negative narrative on youth and recognize the significant role of young people in peacebuilding.

“Youth have for too long been cast away as either the perpetrators of violence or its victims,” he continued, stressing that: “With this resolution the Security Council recognizes the important contributions that young people make in countering violent extremism and supporting peacebuilding efforts around the world.”

Through the resolution, the Council also urged Member States to increase their political, financial, technical and logistical support, that take account of the needs and participation of youth in peace efforts, in conflict and post-conflict situations, including those undertaken by relevant entities, funds and programmes.

It also encourages all those involved in the planning for disarmament, demobilization and reintegration to consider the needs of youth affected by armed conflict.

And for next steps, the resolution requests Secretary-General Ban Ki-moon to carry out a “progress study” on the youth’s positive contribution to peace processes and conflict resolution, in order to recommend effective responses at local, national, regional and international levels.

It also requests the Secretary-General to include in his reports measures taken to implement the text, “including information on youth in situations of armed conflict and the existence of measures relating to the prevention, partnerships, participation, protection, disengagement and reintegration of youth under this resolution.”

At the Security Council’s first-ever meeting on the issue in April, Mr. Ban said that “the role of youth lies at the heart of international peace and security” and emphasized the need “to encourage young people to take up the causes of peace, diversity, and mutual respect.” 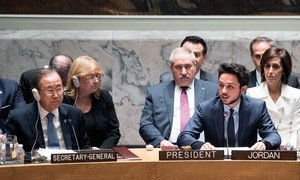 Involving youth in peacebuilding processes the world over is essential to lasting global stability and stemming the growth of radicalism, Secretary-General Ban Ki-moon declared today in remarks delivered to a Security Council session devoted to the role of youth in countering violent extremism and promoting peace.