UNICEF/Kiran Panday
A young boy is administered measles and rubella vaccine at a health post in Gorkha District, Nepal.
8 December 2015

The World Health Organization (WHO) today issued a comprehensive analysis of global health trends since 2000, and laid out actions that should be prioritized over the next 15 years to achieve the newly-agreed United Nations Sustainable Development Goals (SDGs), saying that universal health care is the “linchpin of development in health.”

Health in 2015: from the MDGs to the SDGs, identifies the key drivers of progress in health during 15 years under the UN Millennium Development Goals (MDGs), and lays out actions that countries and the international community should prioritize starting 1 January 2016.

The report contains “snapshots” on 34 different health topics that outline trends, achievements made, reasons for success, challenges and strategic priorities for improving health in the different areas. These “snapshots” range from air pollution to hepatitis to road traffic injuries.

Although the health MDGs missed a number of global targets, according to the report, the overall results were impressive, with the past 15 years witnessing major declines in child and maternal mortality, and progress in the fight against HIV, tuberculosis and malaria in developing countries.

Saying the world now stands on “the threshold of a new era,” WHO Director General Dr. Margaret Chan said in the report’s preface the new report is a first step in a series of actions she is taking to make her organization fit to fully support the implementation of the Sustainable Development Goals agenda.

Even though almost all the SDGs are directly related to health or will contribute to health indirectly, one goal (SDG 3) specifically sets out to ‘ensure healthy lives and promote well-being for all at all ages.’

“Universal health coverage cuts across all of the health-related goals,” according to Dr. Marie-Paule Kieny, WHO’s Assistant Director-General of Health Systems and Innovation. “It is the linchpin of development in health and reflects the SDGs strong focus on equity and reaching the poorest, most disadvantaged people everywhere.”

“As the global agency with the mandate to cover the whole health agenda, WHO will take a leading role in supporting countries to set their own national targets and strategies, advising on best-buy interventions, defining research priorities and monitoring progress in achieving the health-related SDGs,” according to Dr. Kieny.

The WHO report presents the analysis for the key areas outlined in the health SDGs:

“One of the biggest challenges will be measuring progress across a staggering number of targets, particularly with the lack of health data in developing countries,” according to Dr. Kieny. SDG monitoring requires regular, high-quality data, for example on the causes of death, from all population groups so that we know where we need to target resources.”

WHO is working with partners to establish a Health Data Collaborative in early 2016 that aims to support countries to build better health data systems. 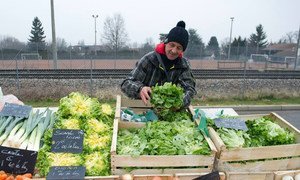 With the United Nations health agency highlighting food safety on World Health Day, the Secretary-General today called for unified efforts to ensure that production, distribution, and preparation of food is done safely.