Security forces in the Democratic Republic of Congo (DRC) have used summary executions,death threats and arbitrary arrests against the opposition, media and civil society since the start of the year and ahead of key elections, according to a United Nations report issued today.

“I urge the Congolese authorities to ensure accountability for the very serious human rights violations documented in this report,” UN High Commissioner for Human Rights Zeid Ra’ad Al Hussein said of the document prepared by the UN Joint Human Rights Office in the DRC.

“This is particularly important as DRC is heading towards a very packed electoral period. If the upcoming elections are to be credible and peaceful, the authorities must ensure that all citizens,independently of their political opinions, can fully participate in an open and democratic debate,and that civil society activists, media workers and political opponents are able to carry out their activities without fear.”

Most violations took place in provinces where opposition parties and civil society are prominent, including Kinshasa, North and South Kivu and Eastern Kasai, with the Congolese national police (PNC) and the national intelligence agency (ANR) responsible for most of those documented.

At least 649 people were arbitrarily arrested and detained in connection with the electoral process during the first nine months of the year, many of whom were denied contact with families or lawyers, the report noted, with the ANR primarily responsible.

“Arbitrary arrests and detentions, in particular of political opponents, civil society activists or demonstrators, were a frequent means of intimidation used by the security forces to restrict freedoms of expression and of peaceful assembly,” the report said.

“Political interference into the course of trials and the lack of progress in the prosecution of some of the accused demonstrate the instrumentalization of justice in order to silence those individuals and as a result to intimidate civil society as a whole.”

It welcomed an accord between the national electoral and national human rights commissions to investigate all allegations of rights violations connected to elections, and acknowledged some progress in ensuring accountability for specific abuses. But, it added, there has so far been no investigation or legal proceedings for abuses related to the polls.

Secretary-General Ban Ki-moon’s Special representative for DRC Maman S. Sidikou pledged to take up the issue with the DRC authorities and international partners, and take “appropriate steps to ensure a free, fair and credible electoral process.”

The UN Joint Human Rights Office (UNJHRO) was created in February 2008 and is comprised of the UN Organization Stabilization Mission (MONUSCO) Human Rights Division and the former Office of the UN High Commissioner for Human Rights in the DRC (OHCHR/DRC). The two offices have been fully integrated and the UNJHRO functions in accordance with their two mandates. 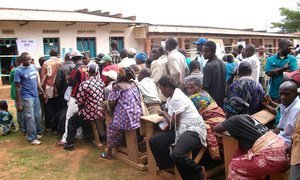 The top United Nations official in the Democratic Republic of the Congo (DRC) told the UN Security Council today that he cannot say with certainty whether the progress attained in the country is sustainable, or whether violence will erupt again and reverse what has been achieved so far.