COP21: Ban tells private sector ‘how we do business today will determine if we can do business in the future’

UN Photo/Tobin Jones
Somalia’s seaport bustles with business as trucks come to off load ships of their cargo.
8 December 2015

Speaking at the United Nations climate change conference (COP21) today, UN Secretary-General Ban Ki-moon told a room full of business leaders that the global gathering will serve to share progress made in important areas and to establish even greater ambition for the future.

“The collective momentum among the private sector for climate action is growing daily,” said Mr. Ban alongside the United States Secretary of States, John Kerry, and the French Minister of Foreign Affairs, Laurent Fabius, at a high-level meeting of the UN Global Compact’s Caring for Business Forum.

Held over two days on the sidelines of COP21, the third annual meeting of the Forum aims to provide a platform for dialogue and action among business, investors, civil society, the UN and government officials.

Since 30 November, the conference site in the north-east of the French capital has been at the heart of climate-related discussions, with thousands of people from all corners of the globe coming together to push for a new universal climate change agreement that will limit global temperature rise to less than two degrees Celsius.

“Across the world, businesses and investors are standing up for a strong agreement in Paris that sends the right market signals,” Mr. Ban underlined. “They are asking for a clear message that the transition to cleaner, low emissions energy sources is necessary, inevitable, irreversible and beneficial.”

With “business” as one of the central themes of COP21 on Tuesday, the UN chief stressed that it should be clear “there is no turning back,” and that all parts of society – CEOs, cities and citizens – must be part of the solution.

“Just over a year ago at my Climate Summit in New York, I called on business to make their voices heard and to demonstrate that green business is good business. Companies from around the globe have responded. Leading companies are showing that they can address climate change and thrive financially,” he insisted.

He noted that more companies and investors are leading on climate action than at any time in history, and that they are doing so “because they understand the risks of climate change, and the opportunities inherent in addressing it.”

“We have seen the power of collaboration first-hand through our UN Caring for Climate initiative. This is now the largest coalition of businesses actively engaging on climate,” he explained, adding that one hundred companies are setting ambitious emissions reduction goals through the science-based targets initiative.

On the issue of carbon pricing, he indicated that companies have been “instrumental” in ensuring that a price on carbon is recognized as a necessary and effective tool. According to the Carbon Disclosure Project, more than 1,000 companies now say that they have set an internal price or plan to in the future. This reportedly compares to just over 100 companies a year ago – nearly a ten-fold increase.

“In the past year alone, over 2,000 companies and 500 investors have registered climate commitments through the UNFCCC NAZCA portal. But to limit global temperature rise to less than two degrees we must go much further and faster,” he warned.

Finally, Mr. Ban addressed all the private sector leaders in the room, telling them that as they leave Paris, he hopes they will carry with them a clear message to their consumers, employees, peers – and Governments – “that how we do business today will determine if we can do business in the future.” 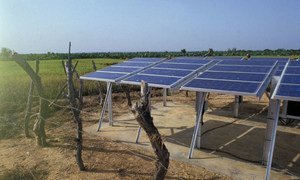 The United Nations and partners launched today a $5 billion initiative to expand renewable energy capacity in Africa as Secretary-General Ban Ki-moon told the UN climate change conference (COP21) in Paris that saving energy is a triple-win in the battle against global warming.