Warning that global suffering has reached levels not seen in a generation, the United Nations and its partners today launched their largest ever humanitarian appeal, calling for 20.1 billion life-saving dollars for 2016, even as the 2015 appeal posts the largest funding gap on record – $10.2 billion.

“Conflicts and disasters have driven millions of children, women and men to the edge of survival. They desperately need our help,” Under-Secretary-General for Humanitarian Affairs and UN Emergency Relief Coordinator Stephen O’Brien said as he launched the Global Humanitarian Overview 2016 in Geneva, calling the outlook for next year grim.

The amount of the appeal, five times that of a decade ago, even tops the revised total appeal for 2015 of $19.9 billion, for which international donors have provided only $9.7 billion, just 49 per cent. The new appeal seeks to deliver life-saving aid to over 87.6 million people across 37 countries, most of which are in conflict.

The “brutal, extended” conflicts in Syria, Iraq, South Sudan and Yemen will remain among the greatest drivers of prolonged humanitarian needs in 2016, fuelling new displacement within countries and across borders, the appeal said.

Worldwide, the number of people forced to flee their homes has already reached 60 million, a level previously unknown in the post-World War II era, half of them children.

“UN agencies and our partners are committed to do everything we can to respond quickly and effectively to the urgent needs of affected people, families, and communities,” said Mr. O’Brien, who heads the UN Office for the Coordination of Humanitarian Affairs (OCHA). “They count on us all today for their tomorrow. I urge the international community to respond generously again to our call for funding to allow us to do the job.”

The appeal is the culmination of a global effort in which hundreds of organizations delivering food, shelter, medicine, protection, emergency education and other basic assistance to people in conflict- and disaster-affected regions come together to assess needs, decide response strategies and present their plans to donors.

“Mass movement of people, be it refugees or people fleeing within their own countries, has become the new defining reality of the 21st century,” UN High Commissioner for Refugees António Guterres told the launching ceremony.

“The international humanitarian system is all too often the only safety net that exists for people fleeing wars. It has to be funded on a scale that’s realistic and commensurate with today’s immense challenges. It is clear that with the present level of resources, we are not able to provide even the very minimum in both core protection and life-saving assistance.”

“The number of people now affected by conflicts and other crises is unprecedented, with an unprecedented impact on their health,” she said. “WHO and its partners are committed to ensuring that everyone - especially women and children – get the health care they desperately need. But we urgently require more funding in order to do so.”

In a foreword to the appeal, Mr. O’Brien gave an overview of the conflicts wracking the world from Syria and Yemen to Ukraine and Nigeria.

“The level of violence is unspeakable,” he wrote. “Millions of people are trapped in conflict zones and subjected to flagrant human rights abuses.”

Looking ahead, he said humanitarian needs are expected to increase, especially as the ongoing El Niño weather pattern is already causing severe hardship in East Africa, notably in Ethiopia, where some 10 million people currently need food aid, and in Central America where one of the most severe droughts on record disrupted agricultural production, putting 2.8 million people in need of immediate food assistance, health care and livelihood support.

“We count on your usual generous support for our work to meet these urgent life-saving needs and restore dignity and humanity to millions of people,” he concluded.

The appeal’s Executive Summary stressed that addressing underfunding requires a range of measures, including adjusting the approach to protracted crises and disasters, leveraging diverse funding sources, using the right mix of financial instruments for each situation and investing more in preparedness.

“Faced with ever-growing needs, we rely on the international community, Governments and the public to give their support and resources – financially and in kind – to allow us to continue humanitarian action,” it concluded. “Our shared aims are to end suffering, meet the immediate needs of crisis-affected people, keep them safe from harm and enable them to live in dignity.” 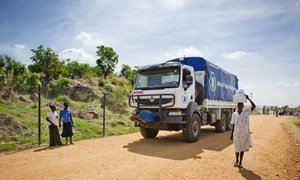 As discussions on the new global sustainable development agenda continued at the United Nations in New York, world leaders, UN officials and humanitarian partners focused on one of the most important challenges today, namely the growing gap between the increasing numbers of people in need of humanitarian assistance and sufficient resources to provide relief.