The United Nations Secretary-General, Ban Ki-moon today announced the appointment of David Nabarro of the United Kingdom as Special Adviser on the 2030 Agenda for Sustainable Development.

“Dr. Nabarro will work with Member States and other relevant stakeholders to galvanize action on implementation of the Agenda and also oversee the Secretary-General’s special initiatives, e.g. Every Woman Every Child,” said Mr. Ban in his wide-ranging address to the media at UN Headquarters in New York today.

Prior to this, Dr. Nabarro has served as Special Envoy of the Secretary-General on Ebola since September 2014, providing strategic and policy direction for the international response, and from 2005 to 2014, he was Senior Coordinator for Avian and Pandemic Influenza.

With over 30 years of experience in public health, nutrition and development work at country, regional and global levels, Dr. Nabarro has also held positions in non-governmental organizations, universities, national Governments and the UN system.

At the same press conference, Mr. Ban also announced the appointment of El Ghassim Wane of Mauritania as Assistant Secretary-General for Peacekeeping Operations.

“Mr. Wane brings extensive experience on peace and security issues and conflict resolution, particularly in Africa in partnership with international and regional organisations, at a time when United Nations peacekeeping has reached a historic high in terms of levels of deployments of civilian and uniformed personnel and complexity of mandates,” said Mr. Ban.

Mr. Wane will succeed Edmond Mulet of Guatemala, whom the Secretary-General has appointed as his Chef de Cabinet.

The UN chief reiterated his deep gratitude and appreciation for Mr. Mulet’s dedicated service in his former position. 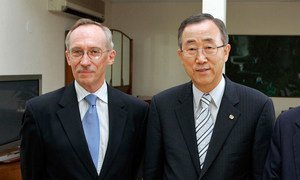