A digital mapping project called ‘Act Now For Tomorrow,’ which was recently launched by the United Nations Children’s Fund (UNICEF), is helping young people around the world identify climate issues in their communities and find ways to address them.

“The global climate map is engaging 500 young people from 65 countries,” Zayn Abaakil, a UNICEF child engagement coordinator, told the UN News Centre in one of the conference halls of the UN climate change conference (COP21) where dozens of innovative climate projects are being showcased over the next two weeks.

The idea behind the project, she said, is for young people to show the link between climate issues and the impacts they see every day that are affecting their health and access to education.

The UN agency recently reported that more than half a billion children live in areas with extremely high flood occurrences, while 160 million are in high drought severity zones.

“They see all the contributions from other young people,” explained Ms. Abaakil, and “they understand that the issue is a global one, that they are all connected around the same problem, but also learn from each other, look at the best practices that have been done from different places, and connect.”

Seven UNICEF youth ambassadors have travelled from all corners of the globe to attend COP21, display their findings, and exchange stories – this time in person. One of them is Andozile Simwinga, a driven18-year old Zambian student who said the impacts of climate change on his country are affecting his self-esteem.

“Things, they don’t actually move the way they’re supposed to move and young people are not happy the way they should be,” he said energetically.

Despite talking about an issue that clearly causes him distress, Mr. Simwinga couldn’t hide the enthusiasm he feels being in Paris and contributing to this global event.

“[The effect of climate change] has really made me feel low – I go out of my house every day and I look at the environment. People have cut down trees, there’s deforestation everywhere. I want to do environmental studies but what am I going to address? What am I going to talk about? What am I going to tell […] my children and also the future generations? We had trees here; we had different types of animals. So it really has affected my self-esteem.”

Meanwhile, 22-year-old Bellinda Raymond traveled from Malaysia to attend the Conference of Youth prior to heading to COP21. She described herself as an active citizen, someone who engages with members of her indigenous community, especially ahead of major weather events that have the potential to destroy homes and vital surroundings. She said her grandparents weren’t affected by climate change in the ways she is today.

“As an indigenous person, we depend on the forest and rivers for our daily life – and we also have our traditional system, also related to the climate. The weather is now unpredictable and we need to adapt to the environment that’s changing,” Ms. Raymond said.

Asked what the worse effect of climate change has been on her community, she answered floods.

“Because last time, when the rain came, it was still okay for us, but now just two hours of rain [and] it’s already flooding and has caused a lot of damage; people cannot go to work, and it’s difficult to access the outside.”

As youth ambassadors celebrated ‘Young and Future Generations Day’ at COP21 on Thursday, government delegations continued to negotiate a new climate agreement which the world’s people hope will be ambitious enough to limit global temperature rise to below 2 degrees Celsius, and prevent further degradation of the planet. 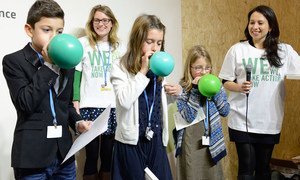