“As the UN Secretary-General has said, we are the first generation which can eradicate extreme poverty but also we are the last generation that could reverse climate change,” recalled Ahmad Alhendawi, speaking to the UN News Service in Paris, France on the margins of the global event.

“It’s the task of our generation to get it done,” he continued. “And my message is that this is our power. The people who are here [at COP21] represent the more active and the more engaged in this debate but my hope could only be that this will trickle down as well in their communities. We have to secure and claim the space for young people in this process.”

The process in which Mr. Alhendawi hopes more youth voices will be heard is the current talks happening in the 32 “negotiating rooms” of the 18 hectare conference centre locate north-east of the French capital.

Youth delegates – the ones the UN Envoy say represent some of the most active young climate advocates – attended the youth event on Thursday wearing t-shirts which read: “We must, we can, we will take action.” Some blew up large green balloons before letting them fly loose and deflate – a symbol of what their world could look like, should an ambitious agreement on climate change is not reached.

Taking the stage, Mr. Alhendawi was greeted with cheering from the crowd as he wished young delegates a “happy youth day.”

“This is one of the most important days – because what is at stake today is your present and future,” he said. “Nobody has the right to gamble with your future.”

Following his remarks, in which he highlighted the importance of even little actions to tackle the significant challenges of climate change, the Executive Secretary of the UN Framework Convention on Climate Change (UNFCCC) – the organizer of COP21– thanked youth representatives for what they have achieved in their respective communities.

Echoing this message, Mr. Alhendawi said he is very proud of the youth movement around the world. “Young people were the mobilizers and the volunteers,” he exclaimed. “And they took to the streets reminding everyone that it’s time to take action on climate change.”

During the event, a manifesto called “Our communiqué: Act like a kid” was presented, which urges world leaders to include climate education in the universal climate agreement expected to be adopted at the end of next week. 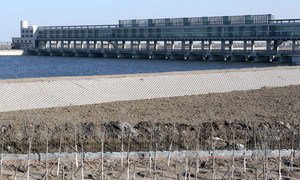 On the third day of the United Nations climate change conference (COP21), dubbed 'Resilience Day,' the UN and the Governments of Peru and France have announced major international partnerships that are mobilizing large-scale financing to protect people who are most vulnerable to climate impacts.