Taking a massive step towards ocean conservation, the island nation of Palau is the latest in a growing number of countries- and the first Pacific island state- to ratify an international agreement to combat illegal fishing, which is estimated to deprive the global economy of up to $23 billion each year and endanger biodiversity and food security in many countries, said the United Nations Food and Agricultural Organization (FAO) today.

“I welcome Palau’s ratification of the Port State Measure Agreement as the first-ever country in the Pacific to have done so,” said FAO Director General, José Graziano da Silva, during a meeting with the President of Palau on the sidelines of the United Nations climate conference in Paris (COP21), according to a news release issued by FAO.

Mr. Graziano da Silva noted that small islands are heavily dependent on fisheries, making them particularly vulnerable to the negative effects of illicit fishing and he expressed hope that Palau’s decision will encourage other small island countries to do the same.

According to FAO, port state measures set standards for inspection of foreign vessels that seek to enter the port of another state and more importantly, it allows a country to block ships it suspects of having engaged in illicit fishing and thereby prevent illegally caught seafood from entering local and international markets.

FAO estimates that illegal, unreported and unregulated (IUU) fishing practices may account for as much as 26 million tonnes of seafood each year, or more than 15 percent of the total global output.

The decision makes Palau the 15th party to the Agreement on Port State Measures to Prevent, Deter and Eliminate Illegal, Unreported and Unregulated Fishing that FAO members adopted in 2009.

“We look forward to partnering with FAO to strengthen our collective efforts to fight IUU fishing,” said President of Palau Tommy Remengesau, adding that these measures will support his country's larger efforts to conserve and manage its fish stocks and biodiversity.

According to FAO, Somalia joined the pact earlier this month and a number of other countries are in the advanced stages of becoming a party to the treaty, which could make the treaty come into effect within the next year, as the agreement stipulates that “it will enter into force once there are 25 Parties to the Agreement.”

FAO said that to help countries such as Palau and Somalia to build their capacity to implement the agreement, article 21 of the treaty foresees a special assistance fund for developing countries.

According to the UN agency, port state measures not only protect economic interests but also protect local food security and ocean health by combating the types of fishing that threaten the sustainable management of fish stocks.

According to the news release, during the recent Our Ocean Conference in Valparaiso, Chile, Mr. Graziano da Silva stressed that ocean conservation is a key component for achieving long-term development goals, stating that “the health of our own planet and our food security depends on how we treat the blue world.”

He also added that encouraging states to become party to the Port State Measures Agreement and to fulfil their international obligations as spelt out in the Guidelines for Flag State Performance, is “essential.”

Speaking at COP21, President Remengesau recalled the added stress that climate change imposes on ocean health in the Pacific, especially on the marine environments and reaffirmed that “Palau is working hard to protect our ocean,” according to the news release.

President Remengesau also highlighted the importance of adopting the agreement as it is critical for the success of the country’s recently established Palau National Marine Sanctuary, “which encompasses our entire exclusive economic zone [EEZ] and includes a no-take zone of over 500,000 square kilometres,” an area roughly the size of France that covers some 80 per cent of Palau’s EEZ, with the remaining 20 per cent designated for domestic use to assure food security for its people.

“Large marine protected areas are critical to allow marine biodiversity to recover and fish stocks to rebound, benefiting our region and the world by helping the oceans to maintain their critical function as an effective carbon sink,” said President Remengesau adding that the agreement should help ensure the success of the newly established marine sanctuary. 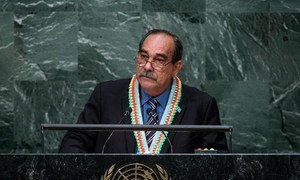 Islands States from the Pacific and Caribbean took to the podium of the United Nations General Assembly today to call for urgent action on climate change, with one leader warning that their people and culture face “potential genocide” from rising seas.