Some 3.2 billion people are now online, representing 43.4 per cent of the global population, but the number still falls significantly short of reaching the anticipated goal of 60 per cent by 2020, according to a United Nations report released today.

While the proportion of households projected to have Internet access in 2020 will reach 56 per cent, exceeding the ‘Connect 2020’ target of 55 per cent, only 53 per cent of the global population will be online in 2020, the report found, ranking the Republic of Korea first in the information and communication technology (ICT) 2015 Development Index (IDI).

Africa ranks worst, with 29 of 37 countries in the IDI’s bottom quarter, and 11 figuring last out of 167, illustrating the importance of addressing the digital divide between the continent and other regions, according to the UN International Telecommunications Union (ITU) flagship annual Measuring the Information Society Report.

Although the 2020 goal is not on track to be achieved, the report, widely recognized as the repository of the world’s most reliable and impartial global data and analysis on ICT development, notes that all 167 countries improved their IDI values between 2010 and 2015 – meaning that levels of ICT access, use and skills continue to improve worldwide.

It also showed that almost 7.1 billion people, over 95 per cent of the global population, are now covered by a mobile-cellular signal.

“ICTs will be essential in meeting each and every one of the 17 newly-agreed Sustainable Development Goals (SDGs), and this report plays an important role in the SDG process,” ITU Secretary-General Houlin Zhao said, referring to the ambitious economic, social and environmental targets that the UN has set for the year 2030.

“Without measurement and reporting, we cannot track the progress being made, and this is why ITU gathers data and publishes this important report each year.”

ITU’s Telecommunication Development Bureau Director Brahima Sanou called progress encouraging in many areas. “But more needs to be done – especially in the world’s poorest and remotest regions, where ICTs can arguably make the biggest difference, and help bring people everywhere out of extreme poverty,” he added.

Latest data show that growth in Internet use has slowed down, however, posting 6.9 per cent growth in 2015, after 7.4 per cent in 2014. Nonetheless, the number of Internet users in developing countries has almost doubled in the past five years, with two thirds of all people online now living in the developing world.

Fastest growth continues to be seen in mobile broadband, with the number of mobile-broadband subscriptions worldwide having grown more than four-fold in five years, from 800 million in 2010 to an estimated 3.5 billion now. The number of fixed-broadband subscriptions has risen much more slowly, to an estimated 800 million today.

“More action will also be needed to ensure that targets for growth and inclusiveness are not missed in developing countries, and in particular in LDCs,” ITU stressed in a news release.

In 2015, Republic of Korea ranked at the top of the IDI, which measures countries according to their level of ICT access, use and skills, closely followed by Denmark and Iceland. 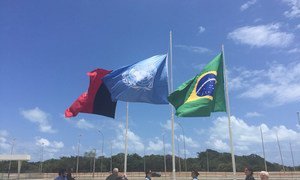 To cover the “breadth and depth” of the recently adopted Sustainable Development Goals, the potential of the data revolution must be explored through the use of new and non-traditional sources of data, United Nations Secretary-General Ban Ki-moon stressed at the 10th annual Internet Governance Forum (IGF), which opened today in João Pessoa, Brazil.