The Asia-Pacific region is facing a ‘hidden epidemic’ of HIV among adolescents, with anestimated 50,000 new infections in 2014 among those aged 15 to 19, United Nations agencies reported today, calling on Governments to develop specifically targeted prevention strategies.

“Adolescence is a time of transition and risk-taking, as children navigate the difficult journey to adulthood,” UN Children’s Fund (UNICEF) East Asia and Pacific Director Daniel Toole said of the report, which is being released ahead of tomorrow’s World AIDS Day, showed that those at highest risk include gay men and other men who have sex with men, transgender people, injecting drug users, and people who buy and sell sex.

The 2014 figure accounts for almost 15 per cent of all new cases in the region. Although new infections are falling overall, they are rising among adolescents, coinciding with an increase in risky behaviour, such as multiple sexual partners and inconsistent condom use.

Titled Adolescents: Under the Radar in the Asia-Pacific AIDS Response and published by the Asia-Pacific Inter-Agency Task Team on Young Key Populations, which includes UNICEF and the Joint UN Programme on HIV/AIDS (UNAIDS), the report warned that the AIDS epidemic cannot be ended as a public health threat by 2030 without tackling the issue of adolescents.

It called on Governments to provide access to adolescent-sensitive HIV testing and treatment and develop better data and adolescent-specific laws and policies, including comprehensive sex education in schools and through social media, information on where to get an HIV test, and condom use.

“It is vital for adolescents to know their HIV status, and get treatment if they need it, but in many countries they are turned away from HIV testing centres,” it stressed.

Ten countries account for 98 per cent of those aged 10 to 19 living with HIV in the region – Cambodia, China, India, Indonesia, Myanmar, Pakistan, Papua New Guinea, the

Philippines, Thailand and Viet Nam. There are now some 220,000 adolescents in the region living with HIV, with large cities like Bangkok, Hanoi and Jakarta hubs of new infections.

“In Asia and the Pacific – as worldwide – adolescents have been largely neglected as a distinct group in focused efforts to prevent HIV transmission and prolong the life of people living with the virus,” Mr. Toole and UNAIDS Regional Director Steven J. Kraus wrote in a joint foreword to the report.

“The result is rising infections among 10-19 year-olds at risk of HIV, and an increase in the number of AIDS-related deaths. These are preventable deaths. As parents, teachers and leaders – as societies – we ask that children in their second decade of life assume ever-growing responsibilities as they approach adulthood.

“And yet, we have responsibilities towards them – to ensure their right to health care, to education, to protection, and to development. Failure to prioritize adolescents in the HIV response leads to injustice at many levels,” they stressed, calling for new action from the highest levels of Government, and new ways of reaching adolescents at risk of and living with HIV. 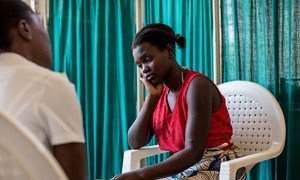 The number of adolescent deaths from AIDS has tripled over the last 15 years with 26 new infections occurring every hour, the UN Children's Fund (UNICEF) announced today and warned that “it is critical that young people who are HIV-positive have access to treatment, care and support.”