COP21: Ban tells world leaders ‘a political moment like this may not come again’

Speaking at the opening of the United Nations climate change conference (COP21) which seeks to reach a new universal agreement to protect people and planet, UN Secretary-General Ban Ki-moon said a political moment like this may not come again.

Speaking at the opening of the United Nations climate change conference (COP21) which seeks to reach a new universal agreement to protect people and planet, UN Secretary-General Ban Ki-moon said a political moment like this may not come again.

“You are here today to write the script for a new future,” Mr. Ban told around 150 world leaders attending the kick-off of the much-anticipated conference in Paris, France.

“We have never faced such a test,” he continued. “But neither have we encountered such great opportunity. You have the power to secure the well-being of this and succeeding generations.”

Opening the floor alongside the President of France, François Hollande, the French Foreign Minister, Laurent Fabius, and the Executive Secretary of the UN Framework Convention on Climate Change (UNFCCC), Christiana Figueres, the UN chief recalled that last September, an “inspiring” new sustainable development agenda with ambitious goals was endorsed by all Heads of State and Government.

“You showed your commitment to act for the common good,” he underlined. “It is now time to do so again. I urge you to instruct your negotiators to choose the path of compromise and consensus. Bold climate action is in the national interest of every single country represented at this conference.”

Insisting that Paris must mark a turning point, Mr. Ban stated that the world needs to know that it is headed to a low-emissions, climate-resilient future, and that “there is no going back.”

Ahead of COP21, countries submitted voluntary climate action plans to UNFCCC, the UN entity organizing the conference. These are formally called Intended Nationally Determined Contributions, or INDCs, and will form the basis of the agreement expected to be reached in two weeks.

The Secretary-General announced today that more than 180 countries have now submitted their national climate plans which cover close to 100 per cent of global emissions.

“This is a good start,” he said. “But we need to go much farther and much faster if we are to limit global temperature rise to below 2 degrees Celsius.”

According to experts, even a 2-degree rise will have serious consequences for food and water security, economic stability and international peace, which is why a universal, meaningful agreement in Paris is crucial, Mr. Ban told the leaders.

“Developed countries must keep their pledge to mobilize $100 billion dollars a year by 2020,” he added. “A new agreement must also include a single transparent framework for measuring, monitoring and reporting progress. And countries with low capacity should receive flexibility and support so they can meet the requirements of this new system.”

Meanwhile, UNFCCC Executive Secretary Christiana Figueres echoed that this past year has been a turning point for the climate agenda.

“After many years of hard work, we finally see irreversibility of direction, depth of engagement and boldness of action,” she told leaders in her opening remarks.

“This turning point is remarkable, but the task is not done,” Ms. Figueres continued. “It is up to you to both capture this progress and chart an unequivocal path forward, with a clear destination, agreed milestones and a predictable timeline that responds to the demands of science and the urgency of the challenge.”

She added that never before “has a responsibility so great been in the hands of so few,” and that the world is looking at world leaders and counting on them.

Delivering a strong message, Oh Joon, President of the UN Economic and Social Council (ECOSOC), said: today: "We are at a tipping point in the Paris climate change conference. There is no turning back. A global decision needs to be taken for a low carbon agreement." 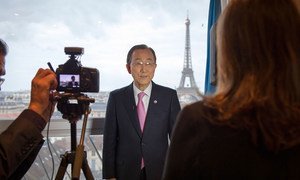 On the eve of the opening in Paris of the United Nations climate change conference, widely known as COP21, Secretary-General Ban Ki-moon is urging all countries and all sectors of society to act now to reach a new universal climate agreement.