©FAO/Giulio Napolitano
A parched field in Kenya where drought has been especially devastating to sub-Saharan agriculture.
27 November 2015

In the weeks leading up to the United Nations climate change conference (COP21), which begins in Paris on Monday and aims to reach a new universal climate agreement, many of the Organization’s agencies and programmes announced their latest climate-related findings, bringing to light new data, major concerns, and underlining existing and potential opportunities to preserve the planet.

In the weeks leading up to the United Nations climate change conference (COP21), which begins in Paris on Monday and aims to reach a new universal climate agreement, many of the Organization’s agencies and programmes announced their latest climate-related findings, bringing to light new data, major concerns, and underlining existing and potential opportunities to preserve the planet.

The World Meteorological Organization (WMO) reported that the amount of greenhouse gases in the atmosphere reached yet another new record high in 2014, continuing a “relentless rise” which is fueling climate change and will make the planet more dangerous and inhospitable for future generations.

Just days later, the agency shared more “bad news for the planet,” warning that 2015 is likely to be the warmest year on record, breaching the symbolic and significant milestone of 1 degree Celsius above the pre-industrial era.

In addition, data from the UN Office for Disaster Risk Reduction (UNISDR) revealed that over the last 20 years, 90 per cent of major disasters have been caused by 6,457 recorded floods, storms, heatwaves, droughts and other weather-related events.

Echoing this message was the UN Food and Agriculture Organization (FAO), which underlined that natural disasters triggered by climate change have risen in frequency and severity over the last three decades, increasing the damage caused to the agricultural sectors of many developing countries and putting them at risk of growing food insecurity.

The World Food Programme (WFP) further insisted that without “ambitious action” to address the causes and consequences of climate change, hunger cannot be eradicated. During the global gathering in Paris, the agency will launch its Food Security Climate Resilience (FoodSECuRE) Facility, a new tool that will help respond to climate disasters before they occur based on climate forecasts.

Ahead of COP21, the World Bank said “climate-smart” development can keep 100 million people out of poverty. According to the Bank’s latest findings, the poorest people are more exposed than the average population to climate-related shocks, and they lose much more of their wealth when they are hit.

Noting the significant impact climatic activities have on African people and countries, the Bank also unveiled a $16 billion business plan to boost the continent’s climate resilience, outlining actions required to maintain and protect its growth and poverty reduction goals.

Raising awareness on groups most vulnerable to the impacts of climate change, the UN Children’s Fund (UNICEF) said youngsters will bear the brunt. More than half a billion children reportedly live in areas with extremely high flood occurrence and 160 million in high drought severity zones, leaving them highly exposed.

Recalling that indigenous peoples own, occupy or manage up to 65 per cent of the Earth’s land surface – and that their voices must be heard in Paris – the UN Development Programme (UNDP) expressed significant concern regarding the exclusion of their issues from national plans to combat climate change. Formally called Intended Nationally Determined Contributions, or INDCs, these will form the basis of the agreement expected to be reached at COP21.

Meanwhile, the important role that nuclear power could play in reducing greenhouse gas emissions was the focus of a new report released by the UN International Atomic Energy (IAEA). It highlighted that nuclear power is one of the major low-carbon energy sources currently available, and many countries believe that it can help them to address the twin challenges of ensuring reliable energy supplies while curbing emissions.

From the UN entity organizing the conference – the United Nations Framework Convention on Climate Change (UNFCCC) – came a set of best practice climate policies from across the world. ‘Climate Action Now’ was introduced in Bonn, Germany, as a solutions guide, revealing a “wealth of existing opportunities” to immediately scale up reductions in greenhouse gas emissions.

Finally, according to a report released by the UN Environment Programme (UNEP), the implementation of the national target plans will limit greenhouse gas emissions by 2030, but a new climate agreement can encourage further action that will be necessary to limit global temperature rise to 2 degree Celsius by 2100. 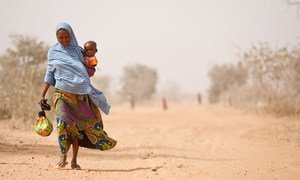