UNICEF/HIVA201500101/Schermbrucker
Malawi teen, Martha, was born with HIV. Now a mother herself, she has defied the odds and her son, Rahim Idriss, is part of Malawis AIDS-free generation. In this picture, she awaits the results of Rahmins HIV test. After two months of waiting, she finds out the Rahmin, now 8-months old, is HIV negative.
27 November 2015

The number of adolescent deaths from AIDS has tripled over the last 15 years with 26 new infections occurring every hour, the UN Children's Fund (UNICEF) announced today and warned that “it is critical that young people who are HIV-positive have access to treatment, care and support.”

“At the same time, those who are HIV-negative must have access to the knowledge and means to help them to stay that way,” said Craig McClure, head of UNICEF's global HIV/AIDS programmes, at a conference in Johannesburg, South Africa, where new data was released by UNICEF.

“Among HIV-affected populations, adolescents are the only group for which the mortality figures are not decreasing,” according to UNICEF.

UNICEF also said among adolescents in sub-Saharan Africa, just over 1 in 10 is tested for HIV.

According to the data in UNICEF's Statistical Update on Children, Adolescents and AIDS, less than half of children under 2 months old are tested for HIV. Only 1 in 3 of the 2.6 million children under the age of 15 living with HIV is on treatment.

UNICEF said the new data shows that most adolescents who die of AIDS-related illnesses acquired HIV when they were infants, 10 to 15 years ago, when fewer pregnant women and mothers living with HIV received antiretroviral medicines to prevent HIV transmission from mother to child.

“These children have survived into their teenage years, sometimes without knowing their HIV status,” UNICEF said.

On a positive note, the new data shows that since 2000, nearly 1.3 million new infections among children have been averted, largely due to advances in the prevention of mother-to-child transmission of HIV.

The new data showed that among adolescents, 26 new infections occur every hour and about half of those living with HIV are in just six countries: South Africa, Nigeria, Kenya, India, Mozambique and Tanzania.

“The gains we have made on preventing mother to child transmission are laudable, and to be celebrated,” Mr. McClure added, “but immediate investments are needed to get life-saving treatment to children and adolescents who are infected.” 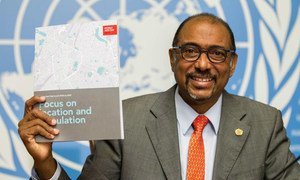 Citing “extraordinary” progress in HIV prevention and response in the last 15 years, a new United Nations report found that many countries are adopting the Fast-Track Strategy developed by the Joint UN Programme on HIV/AIDS (UNAIDS), which allows more people to receive timely treatment for HIV, in an effort to end AIDS by 2030, as part of the recently adopted Sustainable Development Goals.