Just days away from the kick-off of the 21st United Nations climate change conference — widely known as COP21 — the UN is reminding its main actors that this conference must be a turning point for climate action.

Beginning on Monday in France's capital, Paris, world leaders will be negotiating a new climate change agreement that aims to keep global average temperature rise below 2 degrees Celsius (3.6 degrees Fahrenheit) — beyond which climate experts say there will be irreversible impacts.

The two-week conference, the 21st Meeting of the Parties to the UN Framework Convention on Climate Change (UNFCCC), also aims to send a loud and clear signal to citizens, markets and the private sector that the transformation of the global economy is inevitable, beneficial, and already under way.

To find out more about COP21 and the UN's expectations, the UN News Centre met with Janos Pasztor, the UN Assistant Secretary-General on Climate Change. Since January, Mr. Pasztor's work has focused on supporting efforts towards a new climate agreement and mobilizing global climate action on the ground.

Janos Pasztor: There are at least two major points. First of all, if we have a good agreement it will allow us to move towards a low-carbon, low-emission future, where there are lots of opportunities for new technology developments and new ways of organizing ourselves. That is an opportunity we must take. Secondly, climate change is already happening. The impacts are already visible. If we take action now, we can address climate change as we move toward a low-emission economy and build a sustainable future. The more we delay, the more we will pay.

UN News Centre: Why do we need to keep the global average temperature rise below 2 degrees Celsius?

Janos Pasztor: If we allow warming to go beyond that, scientists tell us there are likely to be potential irreversible impacts on people, on natural ecosystems, and therefore, on the economies of the world. Now the 2 degrees is not a very hard level. Many are saying that it actually has to be much less than 2 degrees for the small island developing countries whose land might become completely inundating with a sea level rise. Already 2 degrees is way too much. So, it must be remembered that when we talk of 2 degrees, it is the maximum. It must be kept as much as possible below that.

UN News Centre: What is the best outcome possible from COP21?

Janos Pasztor: We are expecting a package of outcomes and it will have four elements – they're interrelated but they're different.

The first one will be the national plans for climate change of each country, for mitigation and adaptation to climate change. Those are plans that are developed &#8220bottom up&#8221 by the countries – this is what they can do.

The second element will be the actual agreement. It will contain the rules of the game on how countries will assess the impact of the totality of the national plans on the objective to keep warming below 2 degrees. And then they will review and assess what it takes to raise the ambition to make sure that we keep below those 2 degrees of global warming. That will be the core of that agreement.

10 Things You Need to Know About COP21. Credit: United Nations

The third part is climate finance. All of this will require financing, public and private finance, and there will be some parts of this package of finance that will go into the agreement.

And the fourth is the action agenda – a collection of actions on the ground to do either mitigation or adaption, and it's to demonstrate that it's already possible, it's already happening and to showcase what are the good partnerships between private sector, public sector and civil society to actually do the work on the ground.

UN News Centre: What are the main challenges ahead?

If we take action now, we can address climate change as we move toward a low-emission economy and build a sustainable future. The more we delay, the more we will pay.

Janos Pasztor: The main challenge ahead is to negotiate the agreement. That's the bottom line. And we have very little time. In fact, the last negotiation week finished recently in Bonn [Germany]. What we now have left in terms of formal negotiation time is only that period during the actual Conference of the Parties [COP] in Paris, the first two weeks of December.

UN News Centre: Can you give us an overview of key issues that are left to be negotiated – what different countries are claiming?

Other countries would like to maintain the existing grouping of countries in the Convention to developed and developing countries, and then have rules that refer to these different groups. So that's quite important because it has implications, not just on the conceptual issue of having divisions like that, but in terms of financing.

But there are other challenges – such as climate finance. Developed countries have committed to providing $100 billion dollars per year by 2020 to developing countries. The $100 billion doesn't have to be on the table in Paris, but what does need to be on the table is a politically credible mobilization trajectory towards this $100 billion. Some progress was made in October, but there is still work to do and there are still announcements that hopefully will be made by some countries. So these are just two examples of difficult issues that still need to be resolved but there are others as well.

UN News Centre: You mentioned the last round of negotiations in Bonn. What came out of those discussions?

Janos Pasztor: What we have is a document that has grown in size. While the actual size doesn't matter – what matters is the content – clearly the longer the text, the more time it takes to negotiate and that's our biggest challenge. The text is some 55 pages long and it will take some time to go through the different elements. What we ended up with at the Bonn negotiation is that countries added into the original draft which was much shorter – specific things that they wanted to see in the final text and there wasn't enough time to negotiate all that in Bonn. So we still have lots of options in there and those will still need to be negotiated both in informal discussions and during COP21.

UN News Centre: What is the significance of COP21 in light of the new 2030 Development Agenda, and how predominantly does climate change figure in it?

Janos Pasztor: The new Sustainable Development Agenda—or Agenda 2030 – is extremely important for the implementation of the climate agreement. First, we have a goal – Goal 13 – which focuses on climate change. But what the other goals are even more important. There are 12 goals [out of 17] that have very specific climate related targets on energy, on forests, on food security, on education – these are all things that will feed into successfully implementing the climate agreement.

The main challenge ahead is to negotiate the agreement.

But what is really important is that if we don't achieve the 2 degree objective, then none of the Sustainable Development Goals can be achieved. And in order to achieve the less than 2 degree objective, we need to do all the things that are in the Sustainable Development Goals. That's the challenge but that is the beauty: these two different processes that are negotiated through separate processes are now coming together at the level of implementation. And this is where the UN system has a very important role also, because we are there to support Member States to help them to address these issues in a coherent and integrated way.

UN News Centre: Just days ahead of COP21, what is your message to world leaders?

Janos Pasztor: World leaders have a very important role in guiding their ministers and negotiators on the broad economic implications of climate change and actions about climate change. So their role for the negotiations is very important. If they don't give clear guidance to the negotiators then they don't know what to agree upon. So that is why the UN Secretary-General has been much engaged with Heads of States and Governments so that they own this process and clearly guide their ministers and their negotiators.

UN News Centre: What do you want to convey to the public? 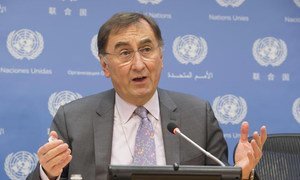 The United Nations climate change conference, widely known as COP21 must be the turning point towards a low-emission, climate-resilient future, the top UN official dealing with climate issues said today just days before the start of the international gathering in Paris, France.