FAO/Jon Spaull
A scientist at an FAO-sponsored facility in India culls seeds from a variety of wheat.
25 November 2015

“Genetic resources for food and agriculture will have to contribute greatly to our efforts to cope with climate change,” said Maria Helena Semedo, FAO Deputy Director-General for Natural Resources, adding that: “We need to act now to reduce the risk that the scale and speed of climate change will surpass our ability to … use these resources in the field.”

Encompassing the diversity of plants, animals and other life forms, genetic resources play a critical role in achieving food security and nutrition objectives as well as addressing climate change, which themselves are confronting.

Crops, for example, with certain staples providing 60 per cent of all human dietary energy, may by 25 per cent lower in 2050 than today.

Such efforts, among others, include maintaining on-site farms diversity and building regional and global gene banks.

“We need to secure and mobilize genetic resources now to have options for the future … and we need to plan,” said Irene Hoffmann, Secretary of FAO’s Intergovernmental Commission on Genetic Resources for Food and Agriculture, who supervised the guidelines’ development.

International cooperation and exchange, she stressed, is of great importance as all countries are inter-dependent on genetic diversity.

However, funding is required to support countries in this process, Ms. Hoffmann stressed. 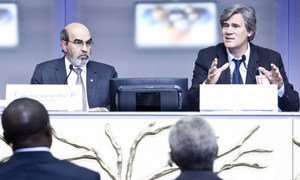