The 2011-2015 five-year period has also been the warmest, with many extreme weather events, especially heatwaves, substantially exacerbated by human-induced climate change, in some cases by a factor of 10 or more, according to the UN World Meteorological Organization (WMO).

“The state of the global climate in 2015 will make history for a number of reasons,” WMO Secretary-General Michel Jarraud said, noting that this year's climate has also been affected by El Niño, a cyclical weather pattern of devastating droughts and catastrophic floods that can affect scores of millions of people around the globe.

“Levels of greenhouse gases in the atmosphere reached new highs and in the Northern hemisphere spring 2015, the three-month global average concentration of CO2 (carbon dioxide), crossed the 400 parts per million barrier for the first time. As such, 2015 is likely to be the hottest year on record, with ocean surface temperatures at the highest level since measurements began.

“It is probable that the 1°C Celsius threshold will be crossed. This is all bad news for the planet. Greenhouse gas emissions, which are causing climate change, can be controlled. We have the knowledge and the tools to act. We have a choice. Future generations will not,” he stressed.

This is the huge task facing world leaders when they gather in Paris on 30 November for a two-week summit that will seek to keep the global average temperature rise to below 2 degrees Celsius above pre-industrial levels.

In its final report before the summit, widely known as COP21, the UN Framework Convention on Climate Change (UNFCCC) last week highlighted multiple steps to immediately scale up reductions in human-caused greenhouse gas, from switching from emission-heavy fossil fuels to renewable energy, to better management of transportation and better use of land.

This year's El Niño, which is still gaining in strength and is on record to be among the strongest ever, is affecting weather patterns in many parts of the world and fuelled an exceptionally warm October, with its impact expected to continue into 2016.

A preliminary estimate based on data from January to October shows that the global average surface temperature for 2015 was around 0.73 °C above the 1961-1990 average of 14°C and approximately 1°C above the pre-industrial 1880-1899 period, WMO reported, noting that South America and Asia are having their hottest year on record, and Africa and Europe their second hottest.

The agency underscored the human element in global warming. It noted that of 79 studies published by Bulletin of the American Meteorological Society between 2011 and 2014, more than half found that anthropogenic climate change contributed to extreme events – the most consistent influence being on extreme heat – with some studies finding that the probability of the observed event has increased by 10 times or more.

Examples include the record high seasonal and annual temperatures in the United States in 2012 and in Australia in 2013, hot summers in eastern Asia and Western Europe in 2013, heatwaves in spring and autumn 2014 in Australia, record annual warmth in Europe in 2014, and the Argentine heatwave of December 2013, WMO said.

Longer-term events, which have not yet been the subject of formal attribution studies, are consistent with projections of near- and long-term climate change. These include increased incidence of multi-year drought in the subtropics, as manifested in the 2011-15 period in the southern United States, parts of southern Australia and southern Africa.

There have also been events, such as the unusually prolonged, intense and hot dry seasons in the Amazon basin of Brazil in both 2014 and 2015 which, while they cannot yet be stated with confidence to be part of a long-term trend, are of considerable concern in the context of potential “tipping points” in the climate system.

♦ Receive daily updates directly in your inbox - Subscribe here to a topic.
♦ Download the UN News app for your iOS or Android devices.
climate change|COP21 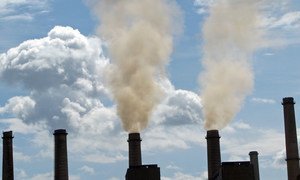 The World Meteorological Organization (WMO) announced today that the amount of greenhouse gases in the atmosphere reached yet another new record high in 2014, continuing a relentless rise which is fuelling climate change and will make the planet more dangerous and inhospitable for future generations.