WHO Yemen
The city of Taiz in Yemen is under virtual siege, with some 200,000 people in need of water and other necessities.
24 November 2015

The situation in the central Yemeni city of Taiz has worsened amid intensified fighting since September, with 200,000 civilians living under virtual siege, in dire need drinking water, food, medical treatment, and other life-saving aid, the top United Nations relief official said today.

“Civilian neighbourhoods, medical facilities and other premises around the city are continually hit by shelling, while checkpoints are preventing people from moving to safer areas and seeking assistance,” UN Under-Secretary-General for Humanitarian Affairs Stephen O’Brien said of the latest situation in Yemen, where the Government, rebel Houthi forces and various other factions have been fighting for months.

“This is unacceptable. I call on all parties to work with the United Nations and other neutral and impartial organizations to urgently facilitate the delivery of life-saving assistance and protection to civilians and the safe and unhindered access of humanitarian workers to Taiz City, without further delay,” he added in a statement.

Mr. O’Brien noted that Al-Houthi and popular committees are blocking supply routes and continue to obstruct delivery of urgently needed humanitarian aid and supplies into the city, while those hospitals that are still functioning are overwhelmed with wounded patients and face severe shortages of doctors and nurses, essential medicines and fuel.

“Despite repeated attempts by UN agencies and our humanitarian partners to negotiate access and reach people, our trucks have remained stuck at checkpoints and only very limited assistance has been allowed in,” he said, voicing alarm at reports that some of the aid has been diverted away from the people it was intended for.

The statement came just days after the UN Office for the Coordination of Humanitarian Affairs (OCHA), which Mr. O’Brien heads, reported that 21.2 million Yemenis – 82 per cent of the total population – require some kind of assistance to meet their basic needs.

In its 2016 Humanitarian Needs Overview, OCHA noted that since 26 March, health facilities have reported more than 32,200 casualties – many of them civilians. 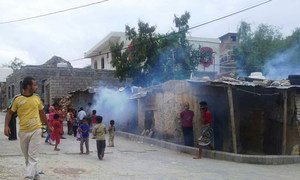 Warning that “humanitarian agencies cannot be a substitute for [Yemen’s] basic services,” a senior United Nations relief official wrapped up a three-day visit to the country stressing that its health and education systems in the country are on the brink of collapse and stressed that “peace is the only solution to prevent a humanitarian disaster.”