Secretary-General Ban Ki-moon today announced the appointment of Michael Keating of the United Kingdom as his new Special Representative for Somalia and Head of the United Nations Assistance Mission in Somalia (UNSOM).

Mr. Keating will succeed Nicholas Kay of the United Kingdom who will complete his assignment at the end of the year. According to the Secretary-General’s spokesperson, Mr. Ban is grateful for Mr. Kay’s dedication, courage and excellent leadership of UNSOM over the past two and a half years, a critical period for Somalia’s political transformation.

According to a biographical note, Mr. Keating brings to this position extensive experience in supporting political and peacebuilding transitions, as well as leading complex humanitarian and recovery programmes in Afghanistan, the Middle East and Africa.

While Associate Director of Chatham House since 2012, he concurrently served as Senior Adviser to the Secretary-General’s Special Envoy to Syria. He was Deputy Special Representative of the Secretary-General and UN Resident and Humanitarian Coordinator in Afghanistan from 2010 until 2012.

Having served as Executive Director of the Africa Progress Panel, a policy group chaired by former United Nations Secretary-General Kofi Annan, his earlier career was divided between assignments with the United Nations, serving in Malawi, Gaza/Jerusalem, New York, Afghanistan and Pakistan, and the private sector, working with companies and public sector bodies engaged in environmental, human rights and development issues. 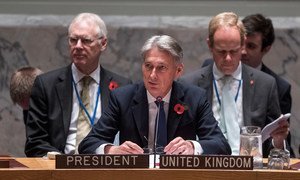 The Security Council today approved a successor operation to the six-year-old United Nations Support Office for the African Union Mission to Somalia, known as UNSOA, underlining the role of the new entity to close gaps in UNSOA’s ability to deliver and to “consolidate and prioritize its efforts in line with the [Council’s] strategic objectives in the country.”