Calling for continued support from the Security Council, the top United Nations official in Kosovo today said the UN Mission there (UNMIK) is continuing to focus its efforts on promoting stability, political progress and respect for human rights.

“I arrived amid renewed political turbulence in Kosovo, and developments during the past week have produced additional potential setbacks in the implementation of the EU-led Belgrade-Pristina dialogue,” Zahir Tanin, the Special Representative of the Secretary-General for Kosovo and Head of UNMIK told the Council, briefing them for the first time since taking up his post in October.

He said he met with the top leadership in both Pristina and Belgrade, as well as with the UN’s international partners and political, community, and religious leaders on the ground.

“It is clear to me that strong leadership from both Pristina and Belgrade, and equally, cohesive actions among the international presences are required if progress is to be sustained,” Mr. Tanin noted, adding that genuine progress was achieved in the EU-facilitated meeting in Brussels on 25 August which led to a package of agreements.

“Leaders in Pristina and Belgrade continue to demonstrate a far-sighted commitment to putting the interests of the people first,” he stressed. “Regardless of shorter term political posturing and problems, I perceive on both sides an underlying resolve to overcome some of the most difficult issues affecting mutual relations through the dialogue. The gains, however, face continuous challenges which affect full and timely implementation of agreements, as demonstrated during the most recent days.”

On several occasions between July and October, violent tactics and disruptive behaviour impeded the proceedings of the Assembly of Kosovo – the institution at the core of the democratic process – Mr. Tanin said. Members of the political opposition reportedly used tear gas and other objects in the Assembly chamber.

Meanwhile, he said reconciliation also requires enhanced effort to determine the fate of persons missing from the conflict, with more than 1,600 persons still unaccounted for. He echoed the Secretary-General's message on the importance of continued progress in the process of the establishment of the Specialist Court, as agreed between the European Union and Kosovo.

Turning to the present influx of refugees and migrants transiting through the Western Balkans in unprecedented numbers, the Head of UNMIK underlined that while Kosovo has been less directly affected so far, the authorities and the international presences are working together to prepare contingencies.

Finally, on the issue of terrorism, he insisted that it demands close cooperation among regional and international stakeholders, and in this light Kosovo's recent adoption of a strategy for the prevention of violent extremism and radicalisation is one important element. 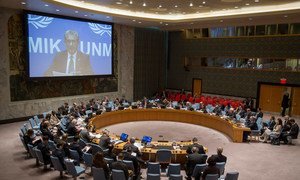