19 November 2015
In the wake of last week’s deadly terrorist bombing in Beirut and the ongoing negative impact of the Syrian crisis on Lebanon’s stability, the United Nations Security Council today reiterated “in these challenging circumstances” its strong support for Lebanon’s State institutions, including the Armed Forces and security services, in their efforts to safeguard the country.

In a statement to the press, the Security Council reiterated its strong condemnation of the terrorist attack carried out by the Islamic State of Iraq and the Levant (ISIL), also known as Da’esh, on 12 November 2015 in Beirut, killing at least 43 and injuring more than 200 people.

The Council underlined the need to bring the perpetrators of these terrorist attacks to justice.

Further to the statement, the members of the Security Council reiterated in these challenging circumstances their strong support for Lebanon’s state institutions, including the Lebanese Armed Forces and security services, in their efforts to safeguard the security and stability of the country.

Expressing continuing concern at the negative impact of the Syrian crisis on Lebanon’s stability and the immediate threat to its security, the Council reiterated the importance of Lebanon’s policy of disassociation and called on all Lebanese parties to cease any involvement in the Syrian crisis, consistent with their commitment in the Ministerial declaration of the current Government and in the Baabda Declaration of 12 June 2012.

On other matters, the members of the Security Council expressed deep concern over the 18-month vacancy in the Presidency of the Republic, which seriously impairs Lebanon’s ability to address the security, economic, social, and humanitarian challenges facing the country.

As such, they called on all Lebanese leaders to adhere to Lebanon’s Constitution and to the Taef Agreement and National Pact, to put Lebanon's stability and national interests ahead of partisan politics, and act responsibly and with leadership and flexibility to urgently convene a parliamentary session and proceed to the election of a President.

The members of the Security Council noted with concern the deep socio-economic impact of the refugee crisis on Lebanon and urged Members States to increase assistance to Lebanon.

Reiterating its full support for the UN Interim Force in Lebanon (UNIFIL), the Council renewed its call on all parties to abide scrupulously by their obligation to respect the safety of UNIFIL and other United Nations personnel.

The members of the Security Council expressed appreciation for the outcome of the latest ministerial meeting of the International Support Group for Lebanon (ISG) convened by the Secretary-General on September 30, 2015 and urged the ISG to continue its work in coordination with the Special Coordinator to seek opportunities to help address rising challenges to Lebanon’s security and stability.

The Council also noted that it was briefed on 18 November 2015 by UN Special Coordinator for Lebanon Sigrid Kaag on the implementation of UN Security Council Resolution 1701, which ended the month-long 2006 war between Israel and Hizbollah in Lebanon.

The members of the Security Council recalled all of the Council’s previous resolutions and the statements of its President on the situation in Lebanon, and they reaffirmed their strong support for the territorial integrity, sovereignty, and political independence of Lebanon.

UN envoy calls for end to violations of withdrawal line between Israel, Lebanon 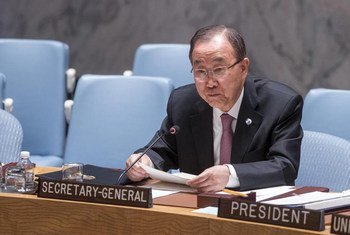