UNAMI
Children in the Khanke Camp near Dohuk city, Iraq, which mainly houses Yazidis fleeing from the Islamic State of Iraq and the Levant (ISIL).
19 November 2015

Condemning in the strongest terms the ‘heinous and cowardly’ murder of Chinese citizen, Fan Jinghui, and Norwegian citizen, Ole Johan Grimsgaard-Ofstad, by the Islamic State of Iraq and Levant (ISIL), the members of the United Nations Security Council today emphasized that such continued acts of barbarism “do not intimidate them, but rather stiffen their resolve.”

“These crimes once again demonstrate the brutality of ISIL, which is responsible for thousands of crimes and abuses against people from all faiths, ethnicities and nationalities, and without regard to any basic value of humanity,” said a Council press statement in the wake of the murder of the two men, who had reportedly been held hostage by ISIL since September.

The members of the Council underlined the need to bring perpetrators of these reprehensible acts of terrorism to justice and stressed that those responsible for the murders will be held accountable.

The Council urged all States, in accordance with their obligations under international law and relevant Security Council resolutions, to cooperate actively with China, Norway and all other relevant authorities in this regard.

The members of the Security Council expressed their deep sympathy and condolences to the family of the victim, to the Government of China and Norway, as well as to the families of all victims of ISIL, said the statement.

Further, the Council reiterated that ISIL must be defeated and that the intolerance, violence and hatred it espouses must be stamped out and ‘stiffened’ its resolve to initiate a common effort amongst Governments and institutions, including those in the region most affected, to counter ISIL, Al-Nusra Front and all other individuals, groups, undertakings and entities associated with Al-Qaida, in line with its resolution 2170(2014).

Additionally, the Council recalled that ISIL, included on Al-Qaida Sanctions List, is subject to the asset freeze and arms embargo in resolution 2161 (2014) and also emphasized that any individual or entity that provides financial or material support to the group, including the provision of arms or recruits, is eligible to be added to the Al-Qaida Sanctions List and subject to sanctions measures.

In its statement, the Security Council reaffirmed the need to combat by all means, in accordance with the Charter of the United Nations, threats to international peace and security caused by terrorist acts, and that any acts of terrorism are criminal and unjustifiable, regardless of their motivation, wherever, whenever and by whomsoever committed. 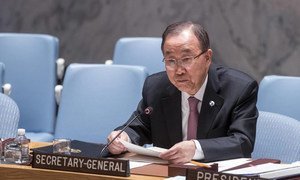