With roughly six weeks left under the United Nations Millennium Development Goals (MDGs) – a set of eight universally-agreed goals adopted in 2000 to rid the world of extreme poverty and disease by 2015 – global leaders, diplomats and health experts are gathering at the UN today in New York to celebrate the progress made against one of the world’s leading killers: malaria.

“The world’s success in rolling back malaria shows just what can be achieved with the right kind of determination and partnerships,” said Mogens Lykketoft, the President of the UN General Assembly.

“It provides bold inspiration to all nations that seek to create a healthy environment for their children and adults. We can and we must eliminate malaria by 2030,” he added, noting that this will require full implementation of the new strategy developed by the Roll Back Malaria Partnership and the World Health Organization (WHO).

“In it, we have the path forward – I urge all member states to fully support implementation of this strategic plan,” Mr. Lykketoft stressed.

Thanks to collective efforts and increased financing, the UN is announcing that the world has met and surpassed MDG6 targets to halt and begin reversing malaria incidence by 2015. Progress in the fight against malaria since 2000 averted more than 6.2 million malaria deaths, some 97 per cent of which have been among young children.

In Africa alone – where some 90 per cent of all malaria-related deaths still occur – an estimated 69 per cent reduction in malaria mortality among children under the age of five over the past fifteen years has reportedly helped to improve overall child survival rates and has directly contributed to MDG4.

In addition, over 100 countries are already free of malaria, and at least 55 are on track to reduce malaria case incidence by 75 per cent by the end of the year. For the first time in history, fewer people than ever are getting infected with malaria in Africa, and many countries around the world are focusing on elimination targets, with new regional commitments announced in the Americas, Eastern Mediterranean, Asia Pacific, and Africa.

“Today, we celebrate major advances in our fight against malaria,” UN Secretary-General, Mr. Ban Ki-moon said in a message.

“With stronger coordination by the Roll Back Malaria Partnership and increased financing, global mortality rates have decreased by more than half since 2000, and the global MDG target for malaria has been achieved,” he stated.

Despite unprecedented advancements, WHO estimates approximately 214 million cases of malaria infection in 2015, claiming the lives of approximately 472,000 people, the majority of them African children under five years of age. With more than half of the world’s population at risk of malaria infection, the health agency warned that malaria remains a major cause and consequence of poverty and inequity worldwide, impeding economic development, undermining food security, stopping children from going to school, and absorbing the capacity of national systems to respond effectively to health security threats.

Meanwhile, lives saved from effective malaria interventions have been linked to a 20 per cent reduction in all-cause child mortality in sub-Saharan Africa since 2000, while efforts to prevent malaria in pregnancy have averted nearly 95,000 newborn deaths between 2009 and 2012.

As the world transitions to a new set of 17 Sustainable Development Goals (SDGs) recently adopted by world leaders in September – which will build on the MDGs – the Roll Back Malaria Partnership is also urging continued commitment to achieve malaria elimination by 2030 and help advance broader development efforts across sectors.

“Under the MDGs, we have seen what can be achieved when we join our efforts and come together in a coordinated fashion,” said Hervé Verhoosel, Representative of the Roll Back Malaria Partnership Secretariat in New York.

“As we set our sights on elimination, we stand to avert nearly 3 billion cases of infection and generate some $4 trillion in additional economic output over the next 15 years. But we must ensure political commitment and predictable financial resources necessary to carry us over the finish line,” he underlined.

♦ Receive daily updates directly in your inbox - Subscribe here to a topic.
♦ Download the UN News app for your iOS or Android devices.
MDG|Malaria 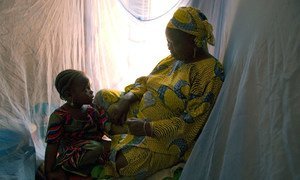 The United Nations Millennium Development Goals (MDGs) galvanized the world to produce the most successful anti-poverty movement in history, helped lift more than one billion people out of extreme poverty, made inroads against hunger and enabled more girls to attend school than ever before. However, despite remarkable gains, it will take more to ensure the poorest and most vulnerable people are not left behind.