Ensuring 15,000 survivors have support they need is ‘my priority number one’ – UN envoy on Ebola

<a href=http://bit.ly/1j8lQ1H>Samwar Fallah/IRIN </a>
Ebola survivor Jerold Dennis offers prayers to patients at the Bomi Ebola Unit in northwestern Liberia. He was one of 13,000 survivors in the region.
18 November 2015

Transmission of Ebola has been stopped in Liberia and Sierra Leone, while Guinea is now treating a baby believed to be its last case, the United Nations Special Envoy on Ebola, Dr. David Nabarro, reported today, underscoring that his top priority is to make sure the thousands of survivors and their families across West Africa have access to the support they need.

Saying “they have a tough time” because “they’re distressed” and “not trusted,” as well as being “a subject of a lot of stigma, Dr. Nabarro said he wants to be sure that every person who survived Ebola can access a comprehensive package of care that helps them, and that help their communities.

“That means that all those who survived, need to be helped to maintain hygiene, and also if they are meant to practice safe sex, they need proper counselling and follow-up testing,” he said. “They need eye care because we know that vision can suffer after Ebola. They need medical support. Often they have terrible joint pains. They need sexual health systems. They need psychosocial support. Sometimes they need economic support.”

“And, they really need to be treated as the heroes of the outbreak,” which killed more than 11,300 people, he said. “So, trying to make sure that survivors and their families can access the support they need is my priority number one.”

“My priority number two is that I want to be sure, that in all the affected countries there is capacity to protect, to detect and to respond in place, so that if there is any resurgence, and any report of suspected new cases, the response is there and that we don’t get caught unaware,” the envoy said. “So, together with my colleagues I’ll be checking up to see and to ensure that rapid response capacity is in place.”

Continuing, Dr. Nabarro explained that his third priority is to honour those who have been affected by this outbreak and to make sure that the world can deal with this kind of problem better in the future.

And as part of the last priority, the envoy said the Advisory Group on the Reform of the agency’s work presented its first report to the UN World Health Organization (WHO) Monday, with three key recommendations, which he highlighted:

Meanwhile, Dr. Nabarro said while the Ebola outbreak in the worst affected countries in West Africa is “not completely over,” he said the transmission of the virus has stopped in Liberia and in Sierra Leone” and in Guinea, “the last confirmed infected person in Guinea – is a three week old girl called Nubia.”

“Unfortunately, her mother died but she is in a treatment unit in Conakry and she tested negative for the second time on Monday,” he said. “We are hopeful that she will be the last case in Guinea.” 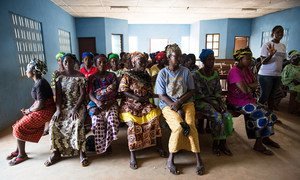 The World Health Organization (WHO) today declared that Ebola virus transmission has been stopped in Sierra Leone, as 42 days – two Ebola virus incubation cycles – have now passed since the last person confirmed to have the disease had a second negative blood test, and pledged continued support to the country towards the recovery of essential health systems.