“Science tells us that there is one path for us to be able to have a stable planet and a safe stable economy, and that is to get onto a below 2 degree path – that is fundamental – and policy is actually following science as it should,” said Christiana Figueres, the Executive Secretary of the UNFCCC, speaking to reporters in Bonn, Germany.

Less than two weeks away from the UN climate conference in Paris, widely known as COP21, she announced that 168 countries, covering almost 90 per cent of global emissions, have now submitted their national climate targets, known as INDCs.

“These do make a huge dent in the projected increase in temperature that we would have by the end of the century, so if these INDCs are fully implemented then we would no longer be on a track of 4 or 5 degrees, we would be on a track of anywhere between 2.7 and 3 degrees, which is a much, much better projection in temperature rise,” Ms. Figueres continued, but warned that this is not yet two degrees or below 2 degrees, which is what some countries still need for their survival and safety.

Introducing the new UNFCCC report— Climate Action Now – A Summary for Policymakers 2015, Ms. Figueres said it is a “solutions” guide. It explains how nations can deploy a wide range of proven policies and utilize existing initiatives to meet the common challenge of climate change and sustainable development.

It also highlights both national and international cooperative actions while underling the vital role of non-State actors such as companies, cities, regions and provinces in realizing bigger reductions in current and future emissions.

UNFCC further described the report as providing, at the request of governments, a straightforward, inspiring go-to-reference to assist ministers, advisors and policymakers pursuing climate actions now and over the years and decades to come.

The findings spotlight how effective policies across six key thematic areas not only reduce emissions rapidly but also advance goals in 15 other critical economic, social and environmental areas.

“Under the UNFCCC, governments have, over the past few years, led a significant effort during a series of technical expert meetings to identify and scope out the policies that lead to effective climate action – this report is the fruit of that effort,” Ms. Figueres explained.

“It underlines the myriad of remarkable transitions that are already occurring nationally and internationally in areas ranging from renewable energy to transportation and land use. In doing so it provides governments and their partners with the blueprints and tool-kits to cost-effectively catalyze action now and take the Paris agreement to the next level of long term ambition,” she added.

She also noted that the “remarkable reality” revealed in this report is that the very policies that deal most effectively with climate change also offer a ready-made portfolio of actions that can equally assist the Sustainable Development Goals (SDGs), adopted by UN Member States in September.

Meanwhile, responding to questions from the press on how the recent attacks in Paris could affect the conference, the Executive Secretary said the UN is still addressing how security around the many events planned can be increased, and that she thinks “this should be a call for personal prudence” on the part of everyone. 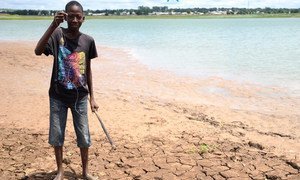