The United Nations Secretary-General Ban Ki-moon hosted a meeting on the links between water management and disaster risk reduction today, stressing that floods, droughts and cyclones have caused more than $1 trillion in damages and affected over four billion people since 1990.

“The poor and most vulnerable have suffered first and worst,” he told, the second meeting convened as part of the UN High-Level Water and Sanitation Days 2015, a set of coordinated events taking place from 18 to 20 November at UN Headquarters in New York. The events coincide with final meeting of the Secretary-General’s Special Advisory Board on the issue.

“Issues of water and disaster resilience are so intimately related that it is impossible to think of one without the other. Yet too often we do, by thinking in silos and responding in fragmented ways. It is time to close these conceptual and operational gaps.”

Today’s meeting comes just 12 days before the opening of the UN climate change conference, widely known as COP21, in Paris, where world leaders will strive to develop a plan to mitigate global warming and its concomitant effects, which scientists say will include more devastating droughts, catastrophic flooding and destructive cyclones.

Mr. Ban highlighted the vital role that water management and disaster risk reduction play in ensuring food security, increased access to energy, and in tackling the challenges of rapid urbanization.

“Investments in climate resilience and disaster risk reduction can also help combat climate change, save lives and avoid the destruction of vital infrastructure,” he said.

He appealed for global commitment to the 2030 Agenda for Sustainable Development and the framework accord adopted in March at the Third United Nations World Conference on Disaster Risk Reduction , in Sendai, Japan, in which water management and disaster risk reduction are fully integrated. 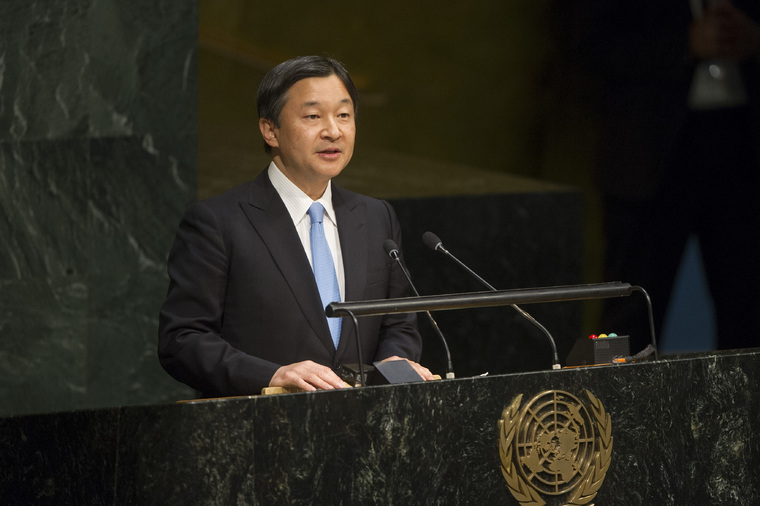 Crown Prince Naruhito of Japan delivers the keynote address at the opening of the Second UN Special Thematic Session on Water and Disasters. UN Photo/Rick Bajornas 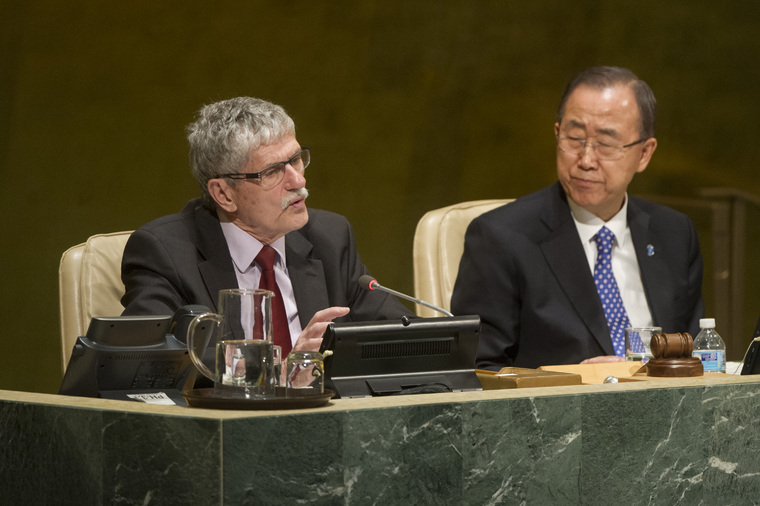 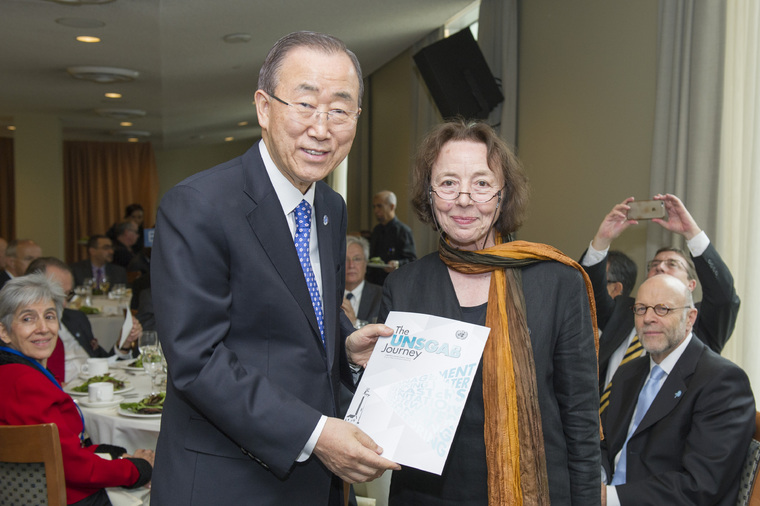 Secretary-General Ban Ki-moon receives a copy of the new report by his Advisory Board on Water and Sanitation (UNSGAB) from Uschi Eid, Chair of the Board. UN Photo/Rick Bajornas

Secretary-General Ban Ki-moon (5th left) in a group photo with members of his Advisory Board on Water and Sanitation (UNSGAB). He is flanked by Crown Prince Naruhito of Japan (left), Honorary President of the Board and its Board Chair Uschi Eid (right). UN Photo/Rick Bajornas

“Member States have put in place a set of goals and targets that encourage cross-sectoral thinking in both the understanding of risks and our approach to managing them. They encourage whole-of society efforts that engage science, civil society and the business community to work in partnership,” he said.“Let us build on the Sendai Framework of Action and Agenda 2030. Let us make the most of the climate change conference that opens in Paris in just 12 days,” he added. “Solutions exist. We have the tools. Our challenge is to connect the dots and work in an integrated manner towards the goals we share.”

In his remarks to the event, General Assembly President Mogens Lykketof said those taking part in the high-level discussions must dedicate themselves to 15 years of targeted and transformative action. Governments need to respond to the SDG goals and targets, meet the commitments they made in Addis and take the necessary measures to mainstream disaster risk reduction into their planning and activities.

“Other stakeholders – civil society, the private sector, particularly insurance companies – must also examine what changes they themselves must undertake and what changes they can help bring about,” he said, stressing that such multi-stakeholder action will be at the heart of a high-level thematic debate he will hold on 11-12 April.

It will focus on sustainable consumption and production, on technology, infrastructure, gender equality, taxation and aligning private sector activities with sustainable development objectives. And it will facilitate and highlight new strategic actions and partnerships to support implementation in these areas.

“Thereafter, the World Humanitarian Summit in May can mark a major turning point for a world struggling to adapt to humanitarian situations. And in October 2016, the Habitat III conference can demonstrate how all of these frameworks are leading to action in the area of housing and sustainable urban development.”

Also today, the Secretary-General’s Advisory Board issued its 10-year report in which it said water continues to be undervalued and badly managed despite a growing crisis with an increasing number of people living under water stress, worsening flood and drought catastrophes, degrading ecosystems, and exacerbated political tensions in water-scarce areas.

“We have not paid enough attention to the ground rules of sharing water – across sectors, and across regional or national boundaries,” it added, stressing that it had to convince the most senior decision-makers of the centrality of the water issue. “Lack of adequate access to drinking water and sanitation plagues billions of people, especially the poorest.”

It highlighted the urgency of ensuring safe, uncontaminated drinking water, providing proper sanitation and toilets not only in the home but in schools, clinics, workplaces and markets, dedicating increased funding and preventing water pollution through waste-water treatment and safe reuse.

“Governments must take proactive and preventive action on growing water-related risks – Governments still lagging behind must fast-track institutional reforms for better management and enhanced accountability. Th¬ey must boost funding and strengthen capacities, especially in water-related statistics and administrative monitoring,” the Board concluded.

It also called on the UN to better address water-related risks. “Considering that a lot of UN organizations deal with water but only as a marginal issue, nothing less than a full-scale water-cultural revolution within the UN is needed,” it warned.

“Relevant UN organizations need to allocate (more) core funding to water and need to review their policies. It is, for example, high time that WHO (UN World Health Organization) endorsed water, sanitation and hygiene as primary prevention.”

Its recommendations include setting up a UN inter-Governmental committee and a scientific panel on water and sanitation, strengthening UN-Water, the UN inter-agency coordination mechanism for all freshwater related issues, and establishing a comprehensive and independently reviewed global monitoring framework.

“Adequate sanitation, healthy aquatic ecosystems and sound water management are essential for human well-being and sustainable development,” Mr. Ban said in a foreword to the report. “Yet increasingly, water-related problems are putting countries, ecosystems, economies and citizens, especially women and children, at risk.” 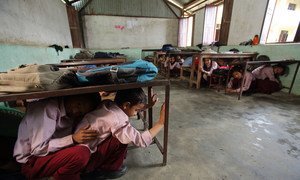 Death, destruction and displacement wrought by natural disasters would be significantly reduced by 2030 under a new framework adopted by countries attending the Third United Nations World Conference on Disaster Risk Reduction, in Sendai, Japan, where they also affirmed the “urgent and critical need” to anticipate, plan for and reduce such risk to more effectively protect people, communities and countries, and to build resilience.