<a href=http://bit.ly/1LzHrKC>Siegfried Modola/IRIN</a>
Dry earth in the desert plains of the Danakil depression in northern Ethiopia.
18 November 2015

Thanks to timely contributions from key donors, the World Food Programme (WFP) announced today that it is able to continue food distributions later this month for more than 1.5 million people in the Somali region of Ethiopia, and can scale up nutrition help to more than 700,000 children and nursing mothers in the most drought-affected areas.

The United Nations agency stressed that the scaling up of food and nutrition support is crucial to prevent vulnerable people falling into a deeper crisis. However, even with the new contributions, it only has 7 per cent of the $228 million budget required for food and nutrition interventions until June 2016.

A dramatic increase in the number of people in need of relief assistance, from 2.5 million at the beginning of the year to 8.2 million in October, led to a serious funding gap, and WFP was concerned that it would have to entirely stop distributions for people affected by the drought at the end of November.

Such a situation was avoided it said, thanks to contributions from Canada, Norway, Sweden, Switzerland, and the UN Central Emergency Response Fund (CERF). The United States Agency for International Development also confirmed a contribution equivalent to $17 million.

“These donors have shown incredible leadership in their response to the current crisis, and their generous contributions will help people cope with this humanitarian crisis exacerbated by El Nino,” said John Aylieff, WFP Representative and Country Director in Ethiopia, in a press release.

According to the agency, the contribution will be used to meet the immediate food needs of vulnerable people in the early part of 2016, while the cash contributions will allow WFP to extend life-saving food and nutrition assistance until the end of the year.

More than 1.5 million people in the Somali region will reportedly receive cereals, pulses, vegetable oil and a fortified high-protein blend known as Super Cereal. These rations will help stabilize malnutrition rates, which have risen sharply in recent months since the drought took hold.

This will complement distributions in other regions following the government of Ethiopia’s allocation of the equivalent of $192 million to relief efforts. However, WFP is warning that humanitarian needs will still remain “extremely high” in the first six months of 2016, and that together with the government, it is gearing up to provide assistance to at least six million people. 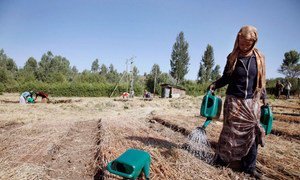 With Ethiopia experiencing its worst drought in decades the United Nations is reporting deepening food insecurity and “severe emaciation and unusual livestock deaths” as the Organization's humanitarian wing has allocated $17 million in emergency funding to help the Government tackle climate challenges and ensure timely food relief.