The UN health agency is attributing these deaths to shifting patterns of disease from extreme weather events – such as heat-waves and floods – and from the degradation of air quality, food and water supplies, and sanitation.

“The upcoming United Nations climate change conference (COP21) in Paris offers the world an important opportunity to not only reach a strong international climate agreement, but also to protect the health of current and future generations,” WHO stressed in a press release, adding that the agreement would have the potential to save lives worldwide.

In 2012, the agency estimated seven million people died from air pollution-related diseases, making it the world’s largest single environmental health risk. It is predicted that climate change will cause an additional 25 000 deaths per year from malaria, diarrhoea, heat stress and under-nutrition between 2030 and 2050. Children, women and the poor in lower income countries will reportedly be the most vulnerable and most affected, widening health gaps.

Highlighting that not only are ways to combat climate change already known and well-documented, WHO said they can bring important health gains. As its new series of climate change and health country profiles illustrate, investments in low-carbon development, clean renewable energy, and strengthening climate resilience, are also investments in health.

“Implementing proven interventions to reduce emissions of short-lived climate pollutants, like black carbon and methane, for example achieving higher vehicle emissions and efficiency standards, would be expected to save approximately 2.4 million lives a year and reduce global warming by about 0.5°C by 2050,” the agency reported.

In addition, placing a price on polluting fuels to compensate their negative health impacts would be expected to cut outdoor air pollution deaths by half, reduce carbon dioxide emissions by more than 20 per cent, and raise approximately $3 trillion per year in revenue – over half the total value of health spending by all of the world’s governments.

WHO is also insisting that strengthening health resilience to climate risks, including measures such as early-warning systems for more frequent and severe heatwaves, and protection of water, sanitation, and hygiene services against floods and droughts, would ensure that recent progress against climate-sensitive diseases, is not slowed or reversed.

“Nevertheless, the profound consequences for health are still not given sufficient attention in debates about climate change,” it warned.

In preparation for COP21, formally the 21st Meeting of the States Parties to the UN Framework Convention on Climate Change (UNFCCC), WHO indicated that countries have made important commitments to cut greenhouse gas emissions and scale up adaptation to climate change, but more needs to be done.

“If countries take strong actions to address climate change, while protecting and promoting health, they will collectively bring about a planet that is not only more environmentally intact, but also has cleaner air, more abundant and safer freshwater and food, more effective and fairer health and social protection systems – and as a result, healthier people,” the press release concluded.

It further highlighted that the conference “is the time for the health community to lend their voice to the international climate discussion and ask countries to come together and make bold commitments to protect our planet and the health of current and future generations.”

♦ Receive daily updates directly in your inbox - Subscribe here to a topic.
♦ Download the UN News app for your iOS or Android devices.
climate change|COP21 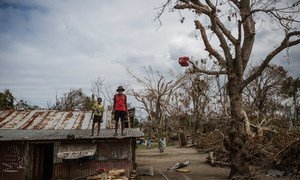 As a result of a strengthening El Niño, the United Nations Children’s Fund (UNICEF) is warning that an estimated 11 million children are at risk from hunger, disease and lack of water in eastern and southern Africa alone, as the weather phenomenon has left droughts and floods in its wake throughout parts of Asia, the Pacific and Latin America.