The top UN relief official in the Central African Republic (CAR) has condemned repeated and deadly attacks that took place last week on sites for internally displaced people (IDPs) in the towns of Batangafo and Bambari.

The sudden eruption of inter communal violence in Batangafo, Ouham Province last Tuesday left at least 10 people killed and several injured. Over 730 shelters were burned in the IDP site hosting over 30,000 people, which is currently the largest site in the country. Meanwhile in Bambari, Ouaka Province, the renewed violence left three people killed, more than 30 injured and newly displaced people.

“I condemn all attacks causing deaths and injuries among the civilian population, and remind all parties involved that the indiscriminate attack against civilians is a war crime,” said Aurélien Agbénonci, the UN Humanitarian Coordinator in the country, in a press release.

“The parties involved in the clashes must respect the inalienable rights of men, women and children to life. Civilians should not be targeted,” he added.

The fresh clashes in Batangafo reportedly forced thousands of people to flee towards the international non-governmental organizations, the compound of the UN Multidimensional Integrated Stabilization Mission in CAR (MINUSCA) as well as some public buildings.

According to the UN, the spiral of violence is also causing additional humanitarian needs in the country, and the increasing insecurity is rendering the work of humanitarian actors even more challenging.

Mr. Agbénonci stressed that despite the rising challenges, humanitarian workers are committed to stay and deliver live-saving assistance, including the provision of medical care, water and sanitation, and the distribution of non-food and food items.

“It is urgent that international laws and conventions are respected and that all parties to the conflict take immediate action and responsibility to respect the humanitarian space and secure the rights of the civilian population of the Central African Republic, who are among the most vulnerable people in the world. We need to end all this suffering that is unacceptable,” he stated.

Until the recent violence, the UN estimates CAR had an internally displaced population estimated at 399,000 people, while almost 460,000 had fled to neighboring countries. 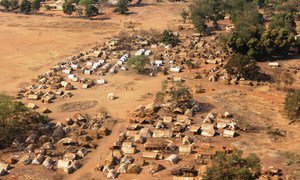 Following a killing and revenge attack on a camp for internally displace people in the Central African Republic (CAR) town of Batangafo, the Office of the UN High Commissioner for Refugees (UNHCR) today expressed concern about the spreading insecurity in the country and condemned the violent attack on the camp.