'Tolerance must be taught, nurtured and defended,' says Ban on International Day

Tolerance is much more than passively accepting the “other;” it brings obligations to act, and must be taught, nurtured and defended, United Nations Secretary-General Ban Ki-moon said today, calling on the world to recognize the mounting threat posed by those who strive to divide, and pledge to forge a path defined by dialogue and mutual understanding.

“People are more connected – but this does not mean there is more understanding. Societies are ever more diverse – but intolerance is growing in many places,” said Mr. Ban in his message to mark the International Day for Tolerance, marked each year on 16 November.

The UN chief said that sectarian tensions can be found at the heart of many conflicts, with the rise of violent extremism, massive human rights violations, and cultural cleansing. Moreover, the biggest crisis of forced displacement since the Second World War has spawned hatred and xenophobia against refugees and others.

Emphasizing that tolerance requires investment by States in people, and in the fulfilment of their full potential through education, inclusion and opportunities, Mr. Ban called for building societies founded on respect for human rights, “where fear, distrust and marginalization are supplanted by pluralism, participation and respect for differences.”

“This is the message of the International Day of Tolerance – reflected in the UN Educational, Scientific and Cultural Organization (UNESCO) Declaration of Principles on Tolerance, adopted in 1995, the Secretary-General said, adding that the same idea animates the International Decade for the Rapprochement of Cultures (2013-2022), which is being led forward by UNESCO across the world.

He also emphasized that the call “to practice tolerance” was written into the identity of the UN 70 years ago. “Today, in a world buffeted by turbulence and change, the Charter's summons remains a vital touchstone for our work,” declared Mr. Ban.

Echoing many of those sentiments, UNESCO Director-General Irina Bokova stressed: “Tolerance is a new idea, one which we need now more than ever. It leads us to respect cultural diversity, ways of life and expressions of our own humanity. It is a necessary condition for peace and progress for all people in a diversified and ever-more connected world.”

UNESCO was founded 70 years ago on this very day on the basis that wars could be avoided if people learned to get to know each other better and understood that, “in the fertile diversity of their cultures, that which unites them is stronger than that which divides them,” emphasized Ms. Bokova.

She said that tolerance is a means of constructing peace; it accelerates innovation and creation, opening peoples' minds to other ways to view the world.

“When violent extremism spreads messages of hate and intolerance, both on the ground and on social media; when human beings suffer persecution, exclusion or discrimination on the basis of their religion or background; when economic crises accentuate social divides and stand in the way of acceptance of others, such as minorities, foreigners or refugees; we must offer up a different discourse, an open message which calls for tolerance,” Ms. Bokova declared, adding that lessons of the past must be more visible and people must be reminded of the extreme situations which can result from rejection of others, racism and anti-Semitism.

“Diversity is a reality, calling us to adapt our policies and act appropriately, for which tolerance is key,” she said, stressing that today's world presents considerable opportunities to better understand each other, share stories, create a public space on a global scale. 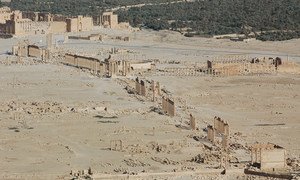 As the planet’s cultural diversity comes under continued attack from militant groups espousing virulent forms of intolerance, the international community must fight back through openness and acceptance of the world’s myriad traditions, the United Nations cultural agency declared today.