UNHCR/Achilleas Zavallis
Members of Samaritan’s Purse, a UNHCR partner on the Greek island of Lesvos, install a drainage pipe at a sanitation facility.
13 November 2015

Despite dangerous sea conditions, the United Nations refugee agency today reported that the number of refugees and migrants arriving on Lesvos continues to be high, at an average of 3,300 people per day so far in November.

“Of the 660,000 refugees and migrants who have reached Greece this year more than half have landed at Lesvos,” Adrian Edwards, spokesperson for the Office of the UN High Commissioner for Refugees (UNHCR), told reporters at a press briefing in Geneva.

“With winter now approaching, the reception conditions and capacity there remain a problem and a number of actions are being taken to address that,” he continued.

So far in 2015, UNHCR estimates that some 3,460 lives have been lost on the Mediterranean, 360 in the last four weeks. Some 250 of these were in the Aegean Greek territorial waters.

The agency says it is working with the Hellenic Coast Guard to facilitate the deployment of additional experienced life guards and has provided equipment to support the on-going rescue efforts on Lesvos.

In light of the continuing strains on Lesvos, UNHCR is also establishing presences at six strategic locations along the island’s north shore to provide newly-arriving refugees with immediate life-saving help, working with volunteers and a new medical NGO partner – Women and Health Alliance International (WAHA) – whose capacity is also being enhanced.

This will be in addition to the existing assembly points where UNHCR and partners already provide places to rest, clothes, food, clean water and medical support. Eight buses and three mini vans are being used to transport new arrivals from the beaches to the reception sites, and this will be expanded as required.

“We are also appealing to the authorities to create additional accommodation and reception capacity as a matter of urgency,” Mr. Edwards said. “There are only 2,800 reception places for the 12,000 refugees and migrants currently on the island. As a result, many people, including women, children and new-born babies have no choice but to sleep outside, lighting fires to keep themselves warm. This situation creates additional protection and safety concerns and is a cause of tension with the local community.”

UNHCR is also underlining that urgent improvements to facilities for refugees in the island’s east at Moria and Kara Tape, under the respective responsibility of the police and the municipality, are also needed, including lighting, latrines and heating as well as site management.

For the time being, refugees reportedly have to find themselves a place where to sleep in the few shelters available creating conditions for the “strongest” to find a shelter to the detriment of persons with specific needs. UNHCR, its partners and volunteers have to constantly intervene to prevent these situations from happening, and are noting it is critical to designate a site manager with the appropriate authority and resources.

In addition to these actions, UNHCR announced its staffing on Lesvos is being increased. Thirteen additional staff members have been deployed, many speaking the language of the refugees, and bringing the total staff on Lesvos to 30.

“We have brought in more humanitarian aid with 295,000 relief items, including 37,000 blankets to keep people warm, over 45,000 coats to protect people from rain, as well as hygiene and baby care kits, sleeping mats and plastic sheeting,” the spokesperson highlighted.

Meanwhile, the agency stressed that the recent agreement reached by leaders in October on the Western Balkans migration route for people fleeing Syria and other strife-torn regions, which calls to establish more reception places in Greece, will be a key factor in stabilizing the situation, but fast implementation is needed.

♦ Receive daily updates directly in your inbox - Subscribe here to a topic.
♦ Download the UN News app for your iOS or Android devices.
greece|refugee 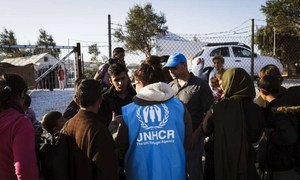 Despite a four-day shipping strike that affected refugees, migrants and host communities, the United Nations refugee agency has continued its work in the Greek Islands, where an estimated 20,000 refugees and migrants are currently staying, placing considerable strain on the limited reception facilities of several islands.