After elections, Ban says people and leaders of Myanmar ‘have it within their power' to build better future

Welcoming this past weekend’s elections as “a significant achievement in Myanmar’s democratic transition,” Secretary-General Ban Ki-moon today extended warm congratulations to the National League for Democracy (NLD) and Daw Aung San Suu Kyi for their landmark performance at the polls and to the Union Solidarity and Development Party (USDP) for its dignified acceptance of the verdict of the people.

Warmly congratulating the people of Myanmar for their “peaceful, dignified and enthusiastic” participation in historic elections of 8 November, the Secretary-General, in a statement issued by his spokesperson, acknowledged, in particular, the courage and vision of President Thein Sein “whose leadership in the reform process has helped achieve progress to this defining stage.”

The Army’s support to the conduct of credible and transparent elections as well as its acceptance of the results, have also been uniquely important, the statement added.

The Secretary-General is his statement went on to commend the Union Election Commission, political parties, domestic and international observers and all others who tirelessly contributed to making these elections such a significant success.

“While saying this, he is regretfully aware that a large number of voters from minority communities, in particular the Rohingya, were denied the right to vote and some were disqualified as candidates,” the statement noted.

Encouraged by the statements of political and military leaders and other relevant actors, as Myanmar begins the process of forming its next government, the UN chief urges all national stakeholders to maintain a calm atmosphere and uphold human rights and the rule of law.

“There is much hard work that remains ahead on Myanmar’s democratic journey and towards making future elections truly inclusive,” continues the statement, underscoring that the people and leaders of Myanmar have it within their power to come together to build a better future for their country, “a future where peace and development take firm root on the foundations of inclusivity, respect and tolerance, where the human rights of all are protected regardless of race, ethnicity, religion or gender, and where no one is marginalized, vulnerable, and discriminated against.”

“The Secretary-General reaffirms the readiness of the United Nations to continue to support efforts in Myanmar to consolidate democracy and advance justice, peace, human rights and development for the benefit of all the people of the country,” concluded the statement, adding that Mr. Ban’s Special Adviser on Myanmar will continue to work with all stakeholders and relevant political forces towards this goal. 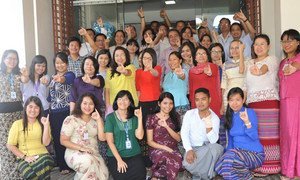 United Nations Secretary-General Ban Ki-moon has congratulated the people of Myanmar for “their patience, dignity and enthusiasm” in historic elections and has encouraged all stakeholders “to maintain the dignified spirit, calm and respect throughout the completion of the electoral process.”