Indigenous peoples in Honduras face a critical situation regarding their land and resource rights, access to social services and judiciary, as well as their vulnerability to violence and impunity, an independent United Nations human rights expert warned following a visit to the country.

“A fundamental problem faced by indigenous peoples is the lack of full recognition, protection and enjoyment of their rights to ancestral lands, territories and natural resources,” Victoria Tauli-Corpuz, the UN Special Rapporteur on the rights of indigenous peoples, said at the end of her nine-day official mission to Honduras.

The Honduran indigenous communities are demanding saneamiento (title clearing) of their collective lands to address the third parties issue and disputes in their territories, noted the expert.

As such, she urged the Government to implement the full agreement reached with the indigenous communities to finalize the saneamiento process and to strengthen governance systems to ensure indigenous peoples’ rights to lands.

“Unfortunately, this is not an isolated situation, and similar human rights abuses have been reported to me in the context of other hydro-electric projects affecting Lenca people, mining and logging concessions affecting the Tolupan people or tourism and infrastructure projects in Garifuna lands,” regretted the expert.

Despite the importance of access to justice, the expert further drew attention to the rights of indigenous women and children and addressed the problem of violence against them.

Greater support is also needed to the economic and social empowerment of indigenous peoples, noted Ms. Tauli-Corpuz, while calling for their equal employment opportunities.

Meanwhile, Ms. Tauli-Corpuz praised Honduras’ ratification of International Labour Organization (ILO) Convention 169 on Indigenous and Tribal Peoples and its favourable vote on the adoption of the UN Declaration on the Rights of Indigenous Peoples. She also noted some specific institutions as well as various legislative and public policy initiatives concerning indigenous issues. 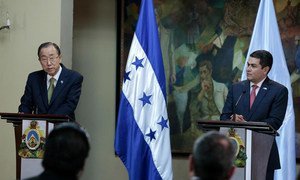 Delivering a “message of hope” on his first ever visit to Honduras, United Nations Secretary-General Ban Ki-moon today urged the National Congress to draw on the tremendous diversity and voices of all the country's people as they undertake measures to address poverty, inequality and insecurity and move towards sustainable development.