<a href=http://bit.ly/1zchm1g>Desire Nimubona/IRIN</a>
People demonstrate in Bujumbura against a decision by Burundi’s ruling party to nominate President Pierre Nkurunziza to run for a third term (April 2015).
12 November 2015

The United Nations Security Council today called on all parties in Burundi to engage in peace talks, warning of further action against those who incite more violence in the Central African country, where a recent upsurge has threatened hard-won stability after decades of ethnic strife and could lead to “potentially devastating consequences” for the entire region if it persists.

Unanimously adopting a new resolution, the 15-member body called on the Government to protect human rights and cooperate with regional African mediators to immediately convene “an inclusive and genuine inter-Burundian dialogue” to find a peaceful resolution of the crisis that erupted after President Pierre Nkurunziza decided to run for a controversial third term earlier this year.

The Council action came three days after senior UN officials warned it that Burundi is at a critical juncture, facing a deep political crisis and rapidly escalating violence, with bodies being regularly dumped in the streets of the capital, Bujumbura, and 200,000 people displaced by the bloodshed.

The resolution stressed the Council’s “intention to consider additional measures against all Burundian actors whose actions and statements contribute to the perpetuation of violence and impede the search for a peaceful solution.”

It asked Secretary-General Ban Ki-moon to deploy a UN team in Burundi to work with the Government, African Union and other partners to develop options to address political and security concerns and to report back in two weeks with options for a future UN presence in the country. It also welcomes his intention to appoint a Special Advisor on Conflict Prevention, including in Burundi, to work with the Government and other stakeholders towards a peaceful resolution of the crisis.

The UN maintained an Electoral Observation Mission in Burundi (MENUB) for the polls. It reported that the July election that won Mr. Nkurunziza a controversial third term was relatively peaceful and conducted adequately, the overall environment was ‘not conducive’ for an inclusive, free and credible electoral process.

The polls took place after two postponements in an environment of “profound mistrust” between opposing political camps, the Mission noted, adding that Mr. Nkurunziza’s decision to run for again precipitated a deep political and socioeconomic crisis, including a failed coup in May.

With several peacekeeping missions over the years under various names the UN played a key role in restoring stability after decades of strife, mainly between Hutus and Tutsis, and in 2006 Burundi became the first post-conflict nation, along with Sierra Leone, to be referred to the UN Peacebuilding Commission newly created to help countries avert relapsing into bloodshed.

But since then there have been sporadic relapses, with the latest crisis by far drawing the worst. In briefing the Council on Monday, UN Under-Secretary-General for Political Affairs Jeffrey Feltman painted a grim picture of the situation in Bujumbura. “Traumatized residents frequently discover mutilated bodies, victims of executions,” he noted.

“There have been hundreds of cases of arbitrary arrest and detention in the past month alone, targeting members of the opposition, journalists, human rights defenders and their families, people attending the funerals of those who have been killed, and inhabitants of neighbourhoods perceived to be supportive of the opposition,” he said. 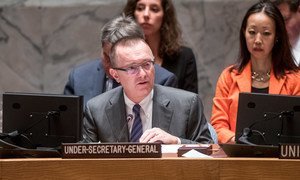 Senior United Nations officials today warned the UN Security Council that Burundi is at a critical juncture, experiencing a deep political crisis and rapidly escalating violence with serious implications for the country's stability and ethnic harmony, as bodies are regularly dumped in the streets of the capital, Bujumbura, and thousands of people flee the bloodshed.