Maternal mortality has fallen by 44 per cent since 1990, United Nations agencies and the World Bank reported today, giving fresh impetus to efforts to reach by 2030 the virtual elimination of women’s chances of dying from pregnancy-related causes as part of the new UN Sustainable Development Goals.

“Maternal deaths around the world dropped from about 532,000 in 1990 to some 303,000 this year, according to the report by the World Health Organization, the UN Children’s Fund (UNICEF), the UN Population Fund, the World Bank Group and the UN Population Division, which is part of the UN Secretariat.

The analyses contained in Trends in Maternal Mortality: 1990 to 2015 – Estimates by WHO, UNICEF, UNFPA, World Bank Group and the United Nations Population Division, are being published simultaneously in the medical journal The Lancet.

Maternal mortality is defined as the death of a woman during pregnancy, childbirth or within six weeks after birth, according to the report.

“Over the past 25 years, a woman’s risk of dying from pregnancy-related causes has nearly halved,” said Dr. Flavia Bustreo, WHO Assistant Director-General, Family, Women’s and Children’s Health. “That’s real progress, although it is not enough. We know that we can virtually end these deaths by 2030 and this is what we are committing to work towards.”

A new Global Strategy for Women’s, Children’s and Adolescents’ Health, launched by UN Secretary-General Ban Ki-moon in September 2015, aims to help achieve the ambitious target of reducing maternal deaths to fewer than 70 per 100,000 live births globally, as included in the Sustainable Development Goals (SDGs).

Reaching that goal will require more than tripling the pace of progress, according to the report.

Dr. Babatunde Osotimehin, Executive Director of the UN Population Fund, said “many countries with high maternal death rates will make little progress, or will even fall behind, over the next 15 years if we don’t improve the current number of available midwives and other health workers with midwifery skills.”

By the end of this year, about 99 per cent of the world’s maternal deaths will have occurred in developing regions, with Sub-Saharan Africa alone accounting for 2 in 3 (66 per cent) deaths. But that represents a major improvement: Sub-Saharan Africa saw nearly 45 per cent decrease in maternal mortality rates, from 987 to 546 per 100, 000 live births between 1990 and 2015.

The greatest improvement of any region was recorded in Eastern Asia, where the maternal mortality ratio fell from approximately 95 to 27 per 100, 000 live births, or a reduction of 72 per cent, according to the report.

“The SDG goal of ending maternal deaths by 2030 is ambitious and achievable provided we redouble our efforts,” said Dr. Tim Evans, Senior Director of Health, Nutrition and Population at the World Bank Group.

Ensuring access to high-quality health services during pregnancy and child birth is helping to save lives, the report said.

“Essential health interventions include: practicing good hygiene to reduce the risk of infection; injecting oxytocin immediately after childbirth to reduce the risk of severe bleeding; identifying and addressing potentially fatal conditions like pregnancy-induced hypertension; and ensuring access to sexual and reproductive health services and family planning for women,” it said.

♦ Receive daily updates directly in your inbox - Subscribe here to a topic.
♦ Download the UN News app for your iOS or Android devices.
pregnan 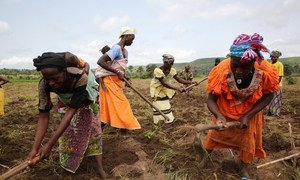 The lives of women and girls around the world have improved in several areas over the last 20 years but they continue to be victims of gender based discrimination and violence, according to a new report launched today by the United Nations.