Two decades after peace accords ended the wars in the former Yugoslavia, Bosnia and Herzegovina is moving in the wrong direction after years of being the “shining star” of peace building and is threatened by Republika Srpska’s decision to hold a referendum, the United Nations Security Council was warned today.

“As we enter the third decade of the peace process, we need to raise our expectations and once again see concrete results and positive momentum. I believe major progress is possible in the next 10 years if we see two basic ingredients: the political will to deliver substantial reforms to take the country forwards; an unwavering commitment to fully respect the Peace Agreement.”

He noted that the ruling party in the Republika Srpska (RS) has threatened to hold an independence referendum in 2018, and that the RS parliament in July decided to organize a referendum on whether to respect the authority and decisions of the country's central judicial institutions, as well as his own decisions to implement the peace agreement.

“The decision of the RS National Assembly has yet to be published and to enter into force,” he said. “There is still an opportunity to rectify this breach of the Peace Agreement and I expect the RS authorities to step back from the brink and put the referendum aside.”

He reiterated a European Union (EU) warning: “The holding of such a referendum would challenge the cohesion, sovereignty and territorial integrity of Bosnia and Herzegovina. It would also risk undermining the efforts to improve the socio-economic situation of all Bosnia and Herzegovina citizens and to make further progress in EU integration.”

Mr. Inzko said that during the first decade after the war, the country was the “shining star” of post-conflict peacebuilding and re-integration, with freedom of movement, one million refugees reclaiming their homes, a stabilized economy, a state judiciary, and three armies that had fought each other brought together under state control and a single defence ministry.

“In 2005, Bosnia and Herzegovina stood as perhaps the best example of what the wider international community can achieve when it is united in its commitment to a peace effort,” he stressed.

A renewed effort for progress will not be easy, “but it is absolutely necessary, because the problems Bosnia and Herzegovina faces today are deep-rooted and systemic, reflecting the complex bureaucracy, the weaknesses in the economy and to be frank the vested interests some political leaders and state-run enterprises have in a dysfunctional status quo,” he warned.

Mr. Inzko said the fairest description of the situation today “is to say that that this is the end of the beginning. The next few months will be critical because they will reveal whether the authorities are committed to delivering on their own reform agendas. Some of the reforms will be difficult, but they will deliver new opportunities for the country and its people,” he added.

“Twenty years after our mission to bring lasting peace to Bosnia and Herzegovina began, there is no doubt we have come a very long way. Huge progress has been made. However, we can conclude with equal certainty that we have not yet completed the job.”

Also today, the Security Council extended for another year the mandate of the EU peacekeepers - known as EUFOR ALTHEA – which in 2004 took over from a stabilization force led by the North Atlantic Treaty Organization (NATO). 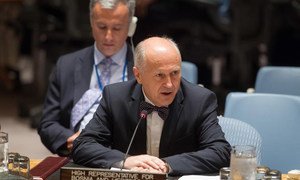 Bosnia and Herzegovina must take 'fresh chance' it has been given, Security Council told

As Bosnia and Herzegovina readies to mark the 20th anniversary of the end of the bloodiest conflict in Europe since the Second World War, it must seize the opportunity to “finally say farewell to the politics of the past” and decisively commit to a new way of doing politics that puts the interests of citizens firmly in first place, the United Nations Security Council heard today.