South Sudan: UN relief wing warns of 80 per cent increase in food insecurity over past year

South Sudan remains engulfed in a spiral of violence – with clashes in southern and central Unity state having “intensified with grave consequences for civilians” – leaving at-risk populations food insecure and vulnerable to diseases, the United Nations humanitarian wing has warned, announcing that relief organizations on the ground are boosting efforts there despite access challenges and lagging funding.

The UN Office for the Coordination of Humanitarian Affairs (OCHA) and partners have managed to reach some towns in central Unity state and Western Equatoria state, and are assisting internally displaced people (IDPs) with health, water, sanitation and hygiene (WASH), according to the latest bi-weekly humanitarian update issued by OCHA.

Thanks to OCHA and its partners’ timely response to cholera, together with a $2.6 million contribution from the UN Central Emergency Response Fund (CERF), the outbreak is now under control. However, the report also cautioned that the rainy season is ongoing.

At the same time, the report warns that Malaria, another water-borne disease, is the primary cause for morbidity and mortality in the country and is continuing to spread, with cases doubling and even quadrupling compared with the same period in 2014.

The UN, together with partners and the South Sudanese Government, is assisting a multi-sectorial malaria task force and scaling up distribution of mosquito nets and information dissemination on malaria prevention.

However, an additional $4 million is urgently needed to ensure the availability of malaria drugs and diagnostic tests, as well as social mobilization and logistical coordination.

The report goes on to note that the humanitarian response has been hampered recently by intensified clashes, posing risks to aid workers’ lives. Civilians have also suffered the grave consequences of killings, sexual violence and forced displacement. Food insecurity in these hard-hit regions has deteriorated and has seen a 4/5 increase compared to the same period last year.

“It is inspiring to witness the efforts our colleagues are making on the front line,” John Ging, Head of Operations for (OCHA), said at the conclusion of his recent visit to the country, stressing that “the international community must continue to support these efforts, and stand in solidarity with those who have been the victims of conflict for far too long.” 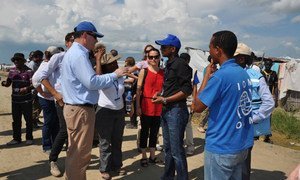 Warning of worsening violence and humanitarian crises across areas of East and Central Africa, the Head of Operations for the United Nations Office for the Coordination of Humanitarian Affairs (OCHA), John Ging, today called for additional support to “people and communities who have faced years of crisis in Sudan, South Sudan and Somalia.”