MONUSCO/Marie Frechon
Peacekeepers of the MONUSCO Force Intervention Brigade patrol the town of Pinga as part of a mission to secure the area.

9 November 2015
The United Nations Security Council today called for the elimination of local and foreign armed groups which have for decades devastated the eastern regions of the Democratic Republic of the Congo (DRC), and urged the immediate resumption of joint operations between the UN peacekeeping force’s Intervention Brigade and the national army.

“The Security Council stresses once again the utmost importance of neutralizing, once and for all, armed groups in the DRC, in particular the Democratic Forces for the Liberation of Rwanda (FDLR) as well as the Allied Democratic Forces (ADF), the Front for Patriotic Resistance of Ituri (FRPI) and the Lord’s Resistance Army (LRA),” the 15-member body said in a presidential statement.

Stressing the need to extend state authority over territory vacated by armed groups and enforce the effective disarmament, demobilization and reintegration of former combatants, the Council noted “with concern” that joint offensive operations between the national army and the Intervention Brigade have yet to resume.

Last month, UN Secretary-General Ban Ki-moon’s outgoing Special Representative for DRC, Martin Kobler, told the Council that President Joseph Kabila has yet to give the green light for the resumption of the joint operations, which have produced many positive results in the past, and he called on him to do so now.

Under previous Security Council resolution the UN Organization Stabilization Mission in DRC (MONUSCO) is authorized to carry out such operations through the Brigade, either unilaterally or jointly with the army.

The Mission, the latest in a series of UN operations in the vast country, which has been wracked by decades-long conflicts that are now largely confined to its eastern regions, has nearly 20,000 uniformed personnel on the ground with a mandate to protect civilians and support the Government in its stabilization and peace consolidation efforts.

The FDLR, a group mainly composed of remnant Rwandan Hutu rebels, remains one of the most important hindrances to peace in eastern DRC, Mr. Kobler has said, noting that the mainly Ugandan rebel ADF, though weakened, is also far from being defeated.

The LRA, originally a brutal Ugandan rebel group, has spilled over into DRC. As for the FRPI, a senior Congolese commander, Germain Katanga, was jailed last year for 12 years by the International Criminal Court (ICC) for war crimes.

The Council today also voiced deep concern at persistently high levels of violence and human rights abuses, including attacks against civilians, widespread sexual and gender-based violence, systematic recruitment and use of children by armed groups, extrajudicial executions and arbitrary arrests.

It acknowledged progress made by the Government in action plans to end recruitment and use of children as well as sexual violence by the army and urged it to continue its efforts with MONUSCO’s support. It also called for the timely holding of presidential and legislative election by November 2016. 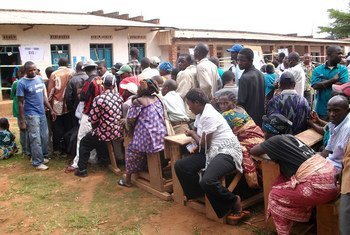 7 October 2015
The top United Nations official in the Democratic Republic of the Congo (DRC) told the UN Security Council today that he cannot say with certainty whether the progress attained in the country is sustainable, or whether violence will erupt again and reverse what has been achieved so far.