The sixth Emissions Gap Report is an assessment undertaken by a team of leading scientists and modelling experts from around the world.

It presents a study of the Intended Nationally Determined Contributions (INDCs) submitted by 146 countries party to the UN Framework Convention on Climate Change (UNFCCC) by 1 October – and up to 88 per cent of global GHG emissions in 2012. At present, 155 countries have submitted their plans.

According to the UN, these INDCs will form the basis of the agreement expected to be reached at the 21st Conference of the Parties to the UNFCCC, COP 21, to be held in Paris, France starting at the end of November.

UNEP’s new report underlines that the national targets represent GHG emission reductions of four to six gigatonnes of carbon dioxide equivalent per year in 2030 compared to projected emissions under current policy trajectories. However, an additional 12 gigatonnes are required to close the gap and maintain a “likely chance” of staying below the 2 degree Celsius target.

“The challenge is to bend the emissions trajectory down as soon as possible to ensure that the net zero emissions goal in 2060-2075 is within reach,” the UN’s environmental programme underlined in a press release.

“The INDCs assessed in this Emissions Gap report signal a breakthrough in terms of international efforts to bend the curve of future emissions,” he explained. “While in themselves not sufficient to limit global temperature rise to the recommended level of 2 degrees Celsius this century, they represent a historic step in the direction of decarbonizing our economies. However, in order to close the gap it is essential that the Paris Agreement adopt a dynamic approach in which ambitions, the mobilization of climate finance and other forms of cooperation can be adjusted upwards at regular intervals.”

If all INDCs are fully implemented, UNEP says the 2030 emissions gap would still be 12 gigatonnes of carbon dioxide equivalent, putting the world on track to a temperature rise of around 3 degrees Celsius by 2100, and bringing significant climate impacts. However this scenario assumes that nations would not review and further accelerate efforts in subsequent years. The report also shows the uncertainties that exist for different scenarios based on the best available scientific evidence, and recommends early action on climate to keep costs as low as possible and avoid deeper and more challenging cuts later.

The UNEP report also found that implementation of the INDCs will likely have benefits beyond the estimated reductions to GHG emission levels as new climate policies and actions are being galvanized by the process. It shows that the preparation of the INDCs has incentivized the exploration of links between development and climate, and the development of new national climate polices, and may be considered as the first step in a transition towards low-carbon economies.

In the meantime, the Paris agreement could build on and support these processes and provide the framework for mobilization of the enhanced mitigation efforts required, the report says.

In addition, it highlights how enhanced energy efficiency – with a particular emphasis on industry, buildings and transport – and expanded use of renewable energy technologies for power production will be critical. Other key sectors emphasized in the studies include forestry, agriculture and waste.

In recognition of the significant opportunity for climate change mitigation through forest-related actions, the report also includes a focus on REDD+, a mechanism being developed by Parties to UNFCCC to reward developing countries for reducing emissions from deforestation and forest degradation. Forest loss reached 7.6 million hectares per year between 2010 and 2015, and reportedly accounts for the largest portion of emissions from land use.

Finally, the report finds that the impact of actions by International Cooperative Initiatives – such as the C40 Cities Climate Leadership Group, the Compact of Mayors, and the Cement Sustainability Initiative – can also be significant.

♦ Receive daily updates directly in your inbox - Subscribe here to a topic.
♦ Download the UN News app for your iOS or Android devices.
COP21|climate change 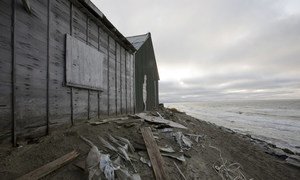