UNHCR/Achilleas Zavallis
UNHCR staff welcome newly arrived Syrian refugees at the Kara Tepe site on the Greek Island of Lesvos and provide information regarding the site and the registration process.
6 November 2015

Despite a four-day shipping strike that affected refugees, migrants and host communities, the United Nations refugee agency has continued its work in the Greek Islands, where an estimated 20,000 refugees and migrants are currently staying, placing considerable strain on the limited reception facilities of several islands.

Mr. Spindler said that on Lesvos, the number of arrivals dropped slightly yesterday adding that there were already an estimated 7,000 to 10,000 refugees and migrants on the island.

He also added that UNHCR has been providing support to the Government in increasing reception, including housing units, but the capacity still remains limited as many people are forced to stay in the open at night, including women and children.

Mr. Spindler said that UNHCR has distributed blankets, sleeping mats and high-energy bars for those staying outside and also informed them about the strike and other relevant information.

Further, he said that on Leros, an addition of 3,400 migrants and refugees over the total local population of 8,000 put a strain on public services, including water and electricity.

“UNHCR staff on Leros are identifying those with specific needs and prioritizing them for what little accommodation space is available. We are also erecting more family refugee housing units, but the overcrowding makes finding space extremely difficult,” said Mr. Spindler adding that the island is facing food shortage due to the shipping strike which halted deliveries to the island, depleting resources in stores.

He also added that the UN agency will work on water and sanitation improvements and partner with local law enforcements to distribute assistance.

Moreover, Mr. Spindler said that Chios recorded nearly 1,700 new arrivals yesterday, bringing the total number of refugees and migrants on the island to at least 2,400, causing shortages of accommodation.

Regarding Samos, Mr. Spindler said that the good weather and calm seas brought an estimated 900 people to the island yesterday, bringing the total population waiting on the island to 3,500.

“There is a shortage of accommodation. Some people are staying at an identification centre, while about 2,500 are in the port area, where the most vulnerable sleep in 16 containers brought by the local authorities,” said Mr. Spindler adding that overcrowding causes difficulties in distributing aid.

Speaking about Kos, he recalled the tragic death of a 4-year-old child and a missing 6-year-old yesterday adding that the arrivals of refugees and migrants on the islands still continued, mainly due to good weather conditions.

Mr. Spindler reported a shortage of accommodation and severe overcrowding causing the UN agency to appeal to the municipality to open a basketball arena, a theatre or a local stadium for accommodation, only to be refused.

In Kalymnos, Mr. Spindler reported that the local community support network has provided good support for the arrivals, including accompanying survivors of a recent shipwreck to Kos for funeral services.

In summary, Mr. Spindler observed that throughout the islands, overcrowding and inadequate reception facilities have forced thousands of women and children to stay out in the open at night, where they are open to all kinds of risks, including sexual violence.

He also expressed concern regarding unaccompanied or separated children and added that UNHCR is providing family reunification assistance, psychological assistance and legal aid to victims of shipwrecks.

Despite the difficulties and the incessant inflow of refugees into the islands, UNHCR reported of progress in various sections.

“The recent agreement of more reception places in Greece will be a key factor in stabilizing the situation, and supporting the relocation programme. UNHCR is working with the European Union (EU) and Member States to support this initiative,” said Mr. Spindler.

He also recounted the progress made this week as 30 Syrians and Iraqis were relocated from Greece to Luxembourg, marking the success of the first planned relocation of asylum-seekers.

Lastly, UNHCR reaffirmed its support to the Greek authorities on improving reception and registration on the islands and appealed for USD 32 million for winter preparations in Greece, which is part of an overall USD 96 million winter plan for Greece and the Balkans.

♦ Receive daily updates directly in your inbox - Subscribe here to a topic.
♦ Download the UN News app for your iOS or Android devices.
migrants|refugee 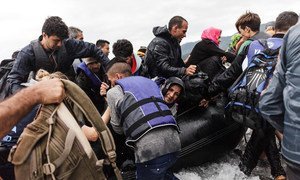 At least 15 people have died and some 38 others are missing in five incidents involving smuggler boats carrying hundreds of refugees and migrants by sea between Turkey and the Greek islands, according to the United Nations refugee agency.